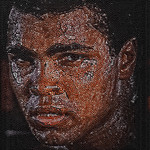 Ali
(Image by lylejk)   Details   DMCA
Boxing legend Muhammad Ali died of septic shock after spending five days at an Arizona hospital for what started out as respiratory problems and gradually worsened, succumbing only after his wife and children arrived at his bedside to say goodbye, a family spokesman said Saturday. "It was a solemn moment," Bob Gunnell told reporters in Phoenix. The details came as Ali's family revealed plans for a Friday funeral in his hometown of Louisville, Kentucky, a daylong affair that will include a procession through the streets where the 74-year-old world champion grew up and learned to box. His body is expected to be returned to the city within two days.
Read the rest of the story HERE: