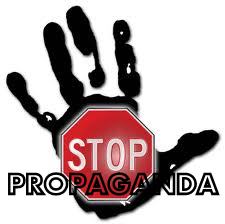 Copyrighted Image? DMCA
'Although propaganda has usually been associated with totalitarian regimes like Nazi Germany and the Soviet Union, the scholar Jason Stanley, a professor of philosophy at Yale University, reminds us in his latest book that propaganda can also pose a grave danger to democracies. The subject couldn’t be more relevant, given the profusion of fake news and  misinformation on the  web today ; In this newly released paperback edition of “How Propaganda Works,” Mr. Stanley analyzes modern propaganda — its operation, techniques and fallout.  “Propaganda is characteristically part of the mechanism by which people become deceived about how best to realize their goals, and hence deceived from seeing what is in their own best interests. This is achieved by various time-tested means...'
Read the rest of the story HERE:

Other Series: View All 455 Articles in "FRAUD & Mendacity."

Other Series: View All 117 Articles in "hateful rhetoric the damage done"

Other Series: View All 406 Articles in "Insanity AFOOT!"

Other Series: View All 118 Articles in "Media; its role in the 21st century"

Other Series: View All 1002 Articles in "Public ignorance & those who use this"