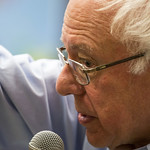 In Colorado, Bernie Sanders isn’t just acting as a surrogate for Hillary Clinton. He’s also holding separate events to keep his movement and its issues alive in a state he won handily in the June Democratic primary. Now he is urging his followers to support a ballot measure to establish the nation’s first universal health care system. It will probably be defeated, yet his backers, who have settled for a bird in the hand this year, are certain they own the future. Colorado was expected to be a battleground state this year. It hasn’t been. Most of the time, Clinton has enjoyed a big lead over Trump in the polls. The same people who ensured Sanders’s primary victory could do the same for her in the general election.