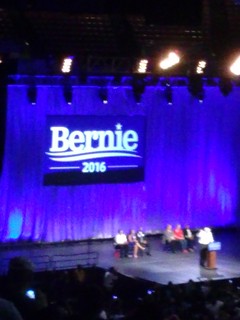 "Mr. Sanders’s appeal is less about oratorical lift and finding common ground than about the opportunity his campaign gives disaffected Democrats to vent their anger at the list of national ills they believe are caused by big business and its conservative allies and have been left unaddressed by President Obama. If Mrs. Clinton’s pitch to voters is that she can make the system more effective, Mr. Sanders is arguing that Mr. Obama was naïve to even bother with a system that needs to be fundamentally changed". With a long list of bullet points written on a yellow legal pad he looks at when he speaks: “We’re going to practice democracy. How’s that?” he exclaimed to huge applause at the start of the Dubuque event, before launching into an hourlong speech that left no time for questions.

STAY IN THE KNOW
If you've enjoyed this, sign up for our daily or weekly newsletter to get lots of great progressive content.
Series: "bernie"