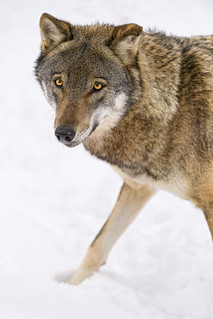 Wolves are part of the natural balance.
(Image by Tambako the Jaguar)   Details   DMCA

This year marks the 20th anniversary of wolf reintroduction in Yellowstone National Park. From 66 released originally they've increased to over 300 and are no longer endangered. That they thrive here is not surprising, for they are creatures of this raw land in a way that we aren't. Wolves are fitted to this environment, and so to understand them, we have to know the country that nurtures them.

The area from Yellowstone to central Idaho has one of the lowest densities of human population in the United States. Those who do live here are held in thrall by land and weather, too harsh for most of our species. The elements keep us ever on the defensive without even noticing us.

People claim to own this country, but she owns us. Daily she teaches us how small our power is: we are like children clinging to a shaggy bison, helpless riders on a massive beast. We had enough power to exile the wolves, but then the wilderness was no longer whole, the grazing herds became unhealthy, and we had to bring back these culling predators. The banishment was short from their time frame.

The mountains they lope around are the eruption of a force that begins to rise in the Dakotas, gathers momentum as it buckles the prairie into ridges and ravines, then thrusts the earth's crust into peaks. Humans read time on the land, and it dwarfs us: Rivers cut the earth for millennia, then vanished into the bottoms of their canyons, leaving them lime dry. Glaciers sheared off mountains, scraping them down to flat mesas. Epochs of wind are still gnawing the buttes into knobs of pocked rock. Now it's time for wolves again. A missing totem, Sunma'nituthaka of the Sioux, has been restored, an ancient spirit returned to us.

Their example may help us better to endure the wheel of the seasons here. Weather weighs on us all, refusing to be ignored. Winter lasts half the year, burying the earth in snow. Bears, badgers, and rattlesnakes retreat into hibernation. Wolves just nap in the blizzards, wrapped in their tails. Antelope nudge through the white mantle to graze, watched now by stalking topaz eyes. People creep in line.

As the storms tire, winter yields, then breaks like river ice; sudden blue holes fracture the gray lid into cumulus floes. The mountain runoff swells the streams into roily torrents. The land wakes up slowly, knowing her first flowers will be sacrificed to May snow. Humans are last to thaw.

Spring blows our fences down. Elk huddle in the lee of bluffs as gales curry the earth's green pelt. Clouds mound together till they darken and break, gashing lightning, spilling hail, drifting purple veils of rain while half the sky stays blue and clear. Wolf whelps nurse in their dens.

The summer sky widens, stretching the land taut across horizons like curing buckskin. The wind winnows pliant grasses, chaps the earth, snaps amaranths and turns them into tumbleweeds bowling across the range till they snag on fences and pile up to build shelter for seedlings. People plow the dirt. Young wolves romp.

The sun scorches through the thin air, driving streams underground and shrinking water holes into puddles beached with alkali. In the dry light, colors fade, sagebrush pales dust green, wheat straw blanches on shimmering hills. Prairie rises from shady coulees to distant ridges of sleeping dinosaurs. Valleys timbered with aspen and pine slope into granite cliffs that soar to snowy crags. Howls chorus above them again in wild polyphony. The land, tough as weathered leather, charges on toward everywhere.

Humans haven't conquered this country; we haven't even got a saddle on her; we're just would-be bison riders holding on however we can. When she stampedes, which is mostly, we cling too tightly to love the ride, but at less than a gallop we can loosen our grip, lift our faces to the wind, and flow with the earth as she rolls beneath us.

While we're riding, quickly out of the corner of our eye, we can glimpse the wolves running free again. They belong here.

William T. Hathaway is an award-winning novelist and an emeritus Fulbright professor of creative writing. His peace novel, Summer Snow, is the story of an American warrior falling in love with a Sufi Muslim and learning from her that higher (more...)

Related Topic(s): Bear; Bison; Environment; Mountains; Predator; Weather; Wilderness; Wolves, Add Tags
Add to My Group(s)
Go To Commenting
The views expressed herein are the sole responsibility of the author and do not necessarily reflect those of this website or its editors.