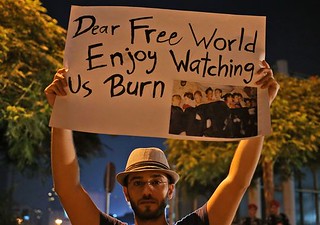 The spree of denials and ignorance over Syria by Moscow and Washington certainly seems to be drawing to a close, with Secretary of State John Kerry and Russian Foreign Minister Sergei Lavrov marathon session in Munich. To add weight to the equation, a tele-con between Vladmir Putin and Barack Obama was the final seal required by the two power houses over Syria. One may ask why it took so long for all to realize that the war zone in Syria, fueled by turf war in Middle East and renewed Cold War, will end up destroying everything that ever existed within the 72,000 square miles of territorial boundary. The human cost of the war is as contested as the entire episode over the evolution of the war in Syria, with UN statistics from August 2015 calculating the death toll at close to 250,000 while other estimates place the numbers at over 470,000, making it the deadliest of all conflicts seen by mankind in 21st century (Iraq post 2003 has an estimated causalities exceeding 500,000 with over 12 years of violence).

The brutalities and barbarianism exceeds many front lines witnessed in the recent past, especially after the evolution of ISIS, which took the scale to a level unheard of. Undoubtedly, while ISIS added a new bloody chapter to the war in Syria, its ability to converge fighters from East to West and also its spread out to new territories through splinter groups (Egypt, Libya, Afghanistan, KSA) and lone wolf/ limited attacks (Paris, San Bernardino) made the realization of an end to this episode more resurgent. With a slight flashback over the episode, it is time to turn the page towards the ceasefire, which is seen as the much-needed window for ending the misery Syrians and the world has seen in the last 5 years or so. The underlying model is hereby presented as a roadmap to lasting and sustained peace for not only Syria, but the region.

The first and foremost step towards a meaningful and sustained ceasefire and solution to Syria is the overt understanding of the parties and the stakes involved in the war. With US and Russia finally assuming the role of guarantor to the war, it is time to rally all the parties within these two broadly divided ranks. The oversight to all this equation falls on UN mandate, guaranteeing an impartial role in the conflict.

From actors, the model moves to the mandate that the road to peace in Syria must look like. First and foremost is the end to violence and war among all parties participatory to this initiative. As of now, the groups like Al Nusra and ISIS have been excluded from the equation, with unanimous approach of leaving no door open to them. However, it is important that parallel to the ceasefire effort, an investigative commission is formed, representing monitoring groups, stakeholders and UN representatives (Feasibly ICJ) to assess the role played by warring parties in the conflict that will form the basis for inclusion, exclusion as well as future trials (War crimes/ Crimes against Humanity). It needs to also assess the reasons that fueled the conflict to this level, including sectarian, regional or global turf war. The presence of foreign fighters as well as regular forces from neighboring countries in the ranks of Pro Assad group is itself a case to consider. The sectarian element that brought about the atrocities to this scale has a lot to do with the way the conflict was portrayed, sometimes through state patronage and in certain cases independent of that. The absence of a Fact-Finding Commission on Role & Responsibility will itself establish a deprived party to the conflict, which can reignite the conflict in Syria or any volatile place, which are in abundance in Middle East and world over.

This mandate shall not be confused with the debate going on in Europe or America, courtesy Donald Trump, over expected refugees. The border closure is more of a joint monitoring and control to ensure that no individual, group or leader is allowed to flee Syria during the implementation of the framework. This will have multiple implications if the borders are left unchecked. The battle-hardened fighters, of which ISIS is one party only, will be again ready to wage the same warfare in any other part of the world, as per the need. Already, countries across all continents are fearing the unchecked return of radicals from Syria, and Paris has seen the tragic implication of it.

Secondly, a lot happening in Syria has neither surfaced nor made headlines, and unless the commission has gone through its investigation and proceeding, all elements related to the war in Syria need to be confined to Syrian borders. An ignorance towards this will simply be a delay for another Syria, another ISIS in coming months or years. This will imply to the regime as well, including Assad and his loyalists, for their role during the conflict.

Simultaneously, in order to achieve the border monitoring and return to peace in Syria, a multinational coalition under UN mandate will be needed in Syria. The numbers can vary, but it needs to be composed of states that are not party to the conflict, namely US, Russia, Iran, KSA/GCC, Turkey, etc.

The coalition needs to go ahead with a general disarmament of all parties in Syria, away from any association. Even if it requires a house-to-house search, the normalcy is dependent on the orientation of Syrian society in future.

Related Topic(s): America; Bashar Al-assad; Ceasefire; Iran; Peace And Freedom; Peace_War; Putin; Refugees; Syria, Add Tags
Add to My Group(s)
Go To Commenting
The views expressed herein are the sole responsibility of the author and do not necessarily reflect those of this website or its editors.