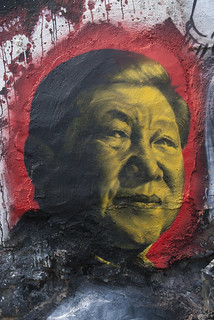 The U.S. is transfixed by its multibillion-dollar electoral circus. The European Union is paralyzed by austerity, fear of refugees, and now all-out jihad in the streets of Paris. So the West might be excused if it's barely caught the echoes of a Chinese version of Roy Orbison's "All I Have to Do Is Dream." And that new Chinese dream even comes with a road map.

The crooner is President Xi Jinping and that road map is the ambitious, recently unveiled 13th Five-Year-Plan, or in the pop-video version, the Shisanwu. After years of explosive economic expansion, it sanctifies the country's lower "new normal" gross domestic product growth rate of 6.5% a year through at least 2020.

It also sanctifies an updated economic formula for the country: out with a model based on low-wage manufacturing of export goods and in with the shock of the new, namely, a Chinese version of the third industrial revolution. And while China's leadership is focused on creating a middle-class future powered by a consumer economy, its president is telling whoever is willing to listen that, despite the fears of the Obama administration and of some of the country's neighbors, there's no reason for war ever to be on the agenda for the U.S. and China.

Given the alarm in Washington about what is touted as a Beijing quietly pursuing expansionism in the South China Sea, Xi has been remarkably blunt on the subject of late. Neither Beijing nor Washington, he insists, should be caught in the Thucydides trap, the belief that a rising power and the ruling imperial power of the planet are condemned to go to war with each other sooner or later.

It was only two months ago in Seattle that Xi told a group of digital economy heavyweights, "There is no such thing as the so-called Thucydides trap in the world. But should major countries time and again make the mistakes of strategic miscalculation, they might create such traps for themselves."

A case can be made -- and Xi's ready to make it -- that Washington, which, from Afghanistan to Iraq, Libya to Syria, has gained something of a reputation for "strategic miscalculation" in the twenty-first century, might be doing it again. After all, U.S. military strategy documents and top Pentagon figures have quite publicly started to label China (like Russia) as an official "threat."

To grasp why Washington is starting to think of China that way, however, you need to take your eyes off the South China Sea for a moment, turn off Donald Trump, Ben Carson, and the rest of the posse, and consider the real game-changer -- or "threat" -- that's rattling Beltway nerves in Washington when it comes to the new Great Game in Eurasia.

Swarms of Chinese tourists iPhoning away and buying everything in sight in major Western capitals already prefigure a Eurasian future closely tied to and anchored by a Chinese economy turbo-charging toward that third industrial revolution. If all goes according to plan, it will harness everything from total connectivity and efficient high-tech infrastructure to the expansion of green, clean energy hubs. Solar plants in the Gobi desert, anyone?

Yes, Xi is a reader of economic and social theorist Jeremy Rifkin, who first conceived of a possible third industrial revolution powered by both the Internet and renewable energy sources.

It turns out that the Chinese leadership has no problem with the idea of harnessing cutting-edge Western soft power for its own purposes. In fact, they seem convinced that no possible tool should be overlooked when it comes to moving the country on to the next stage in the process that China's Little Helmsman, former leader Deng Xiaoping, decades ago designated as the era in which "to get rich is glorious."

It helps when you have $4 trillion in foreign currency reserves and massive surpluses of steel and cement. That's the sort of thing that allows you to go "nation-building" on a pan-Eurasian scale. Hence, Xi's idea of creating the kind of infrastructure that could, in the end, connect China to Central Asia, the Middle East, and Western Europe. It's what the Chinese call "One Belt, One Road"; that is, the junction of the Silk Road Economic Belt and the Twenty-First Century Maritime Silk Road.

Since Xi announced his One Belt, One Road policy in Kazakhstan in 2013, PricewaterhouseCoopers in Hong Kong estimates that the state has ploughed more than $250 billion into Silk Road-oriented projects ranging from railways to power plants. Meanwhile, every significant Chinese business player is on board, from telecom equipment giant Huawei to e-commerce monster Alibaba (fresh from its Singles Day online blockbuster). The Bank of China has already provided a $50 billion credit line for myriad Silk Road-related projects. China's top cement-maker Anhui Conch is building at least six monster cement plants in Indonesia, Vietnam, and Laos. Work aimed at tying the Asian part of Eurasia together is proceeding at a striking pace. For instance, the China-Laos, China-Thailand, and Jakarta-Bandung railways -- contracts worth over $20 billion -- are to be completed by Chinese companies before 2020.

Related Topic(s): Chess; China Politics; Economic; Military; Putin, Add Tags
Add to My Group(s)
Go To Commenting
The views expressed herein are the sole responsibility of the author and do not necessarily reflect those of this website or its editors.