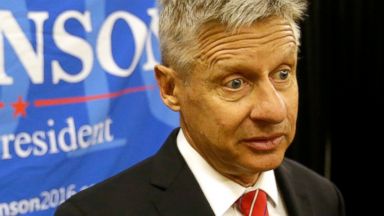 I spent the past three weeks traveling with the Libertarian presidential campaign of former New Mexico governor Gary Johnson. The transition from the Democrats to the Libertarians was not an easy one for me. I consider myself to be liberal or progressive or whichever term is in vogue now. I was a third generation Democrat. Indeed, to hear my grandfather tell the story, Franklin Roosevelt was personally waiting for him at Ellis Island to give him American citizenship and a job. We owed our loyalty to the Democrats, he used to say. We were there for the Democrats because they were there for us. The WPA taught my grandparents how to speak English, and WPA classes taught them the information they needed to become citizens.

We were a Western Pennsylvania union family. My mother recalled with tears of joy shaking John F. Kennedy's hand during the 1960 presidential campaign. The first time I ever saw my father cry was when Robert Kennedy was assassinated in 1968. My parents protested the war in Vietnam. They marched for civil rights. I was the only kid in my second-grade class to vote for McGovern over Nixon in the student straw poll.

In college I was the vice president of the George Washington University College Democrats. I introduced former senator George McGovern when he announced his candidacy for president at GW in 1983. I later took a student coordinating job on the McGovern campaign.

I had spent nearly 15 years in the CIA. (Liberals are patriots, too, after all.) I opposed the Iraq War during that period, as had many of my CIA colleagues, and I was vehemently opposed to the Bush administrations use of drones in warfare. I truly believed that Obama would change all that. In fact, though, the Obama national security policy was nothing more than an extension of the Bush national security policy, only bloodier, at least when it came to the use of drones.

Indeed, according to The New York Times, Bush killed some 296 "terrorists" and 195 civilians in 50 drone strikes between 2002, the date of the first drone strike, and January 2009. Obama killed 3,040 "terrorists" and 391 civilians in 506 drone strikes during his presidency. Amnesty International's figures are far more chilling than The New York Times', citing Pakistani and NGO reports documenting "thousands" of civilian deaths in Pakistan alone.

I had already begun to sour on Obama when I was arrested and charged with five felonies related to an interview I had given to ABC News in 2007, blowing the whistle on the CIA's torture program. The Bush Justice Department had closed the case against me in December 2008, finding that I had not committed a crime. I had no idea that the Obama Justice Department had secretly reopened the case four weeks later. I was the only CIA officer ever charged with a crime related to the torture program -- not because I tortured anybody, but because I told the American people that torture was taking place.

Obama admitted that "we tortured some folks," but he never charged the torturers with a crime. Nor did he charge the CIA leaders who came up with the torture program, the lawyers who twisted the law to justify it, or the CIA officers who destroyed evidence of it. Meanwhile, I did 23 months in a federal prison.

Ronald Reagan famously said that he didn't leave the Democratic Party. The Democratic Party left him. I felt exactly the same way. What was the difference between the Democrats and Republicans on the issues of war and peace, torture, and diplomacy? There was none. Obama told authors Mark Halperin and John Heilemann in their book "Double Down: Game Change 2012" that he couldn't understand why liberals were disappointed with his handling of counterterrorism. "I never said I was a liberal," Obama stated. It was time for me to look for a new home. I voted for Gary Johnson in the 2012 election.

About three weeks after I got to prison, I received a letter from Gary Johnson. Johnson, the former two-term Republican governor of New Mexico, had switched to the Libertarians in 2011. "I think you got screwed," he said in the letter, adding that he had followed my case closely. I learned later that he had also sent letters to the Attorney General and to the director of the Bureau of Prisons asking that they transfer me to home confinement.

When I got home nearly two years later, one of the first calls I received was also from Gary Johnson. He said that he was running for president again in 2016 and he wanted to know if I would serve as an adviser to the party. I accepted.

I admire and support Libertarian ideas on war and peace and on government overreach. They oppose the wars in Afghanistan and Iraq. They oppose intervention in Syria, Libya, and elsewhere. They want to slash the Pentagon budget. The want to immediately end the "war on drugs." The Libertarians also understand that the Obama administration has launched an unprecedented war on whistleblowers. Johnson has said publicly that if he were to be elected president, he would pardon Ed Snowden, Chelsea Manning, Tom Drake, Jeffrey Sterling, and me. The Libertarians are also strong supporters of marriage equality and marijuana legalization, issues that are very important to me.

This isn't to say that I support everything the Libertarians stand for. They're utterly wrong, for example, in their support for private prisons, their opposition to an increase in the minimum wage, and universal healthcare.

There are also serious organizational problems within the Libertarian Party. We are just beginning to see a rift between young millennials who support a more inclusive party with much in common with the Bernie Sanders wing of the Democratic Party, and old guard party members who oppose all government programs on principle and generally just want to be left alone.

Related Topic(s): Libertarian; Party Politics Democratic; Party Politics Republican; Torture; Whistleblowers-ing, Add Tags
Add to My Group(s)
Go To Commenting
The views expressed herein are the sole responsibility of the author and do not necessarily reflect those of this website or its editors.