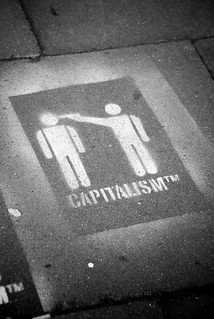 Conservatives and liberals interminably debate the merits of "the free market" versus "the government." Which one you trust more delineates the main ideological divide in America.

In reality, they aren't two separate things and there can't be a market without government. Legislators, agency heads and judges decide the rules of the game. And, over time, they change the rules.

The important question, too rarely discussed, is who has the most influence over these decisions and in that way wins the game.

Two centuries ago slaves were among the nation's most valuable assets, and a century ago, perhaps the most valuable asset was land. Then came another shift as factories, machines, railroads and oil transformed America. By the 1920s most Americans were employees, and the most contested property issue was their freedom to organize into unions.

In more recent years, information and ideas have become the most valuable forms of property. This property can't be concretely weighed or measured, and most of the cost of producing it goes into discovering it or making the first copy. After that, the additional production cost is often zero.

Such "intellectual property" is the key building block of the new economy. Without government decisions over what it is, and who can own it and on what terms, the new economy could not exist.

But as has happened before with other forms of property, the most politically influential owners of the new property are doing their utmost to increase their profits by creating monopolies that must eventually be broken up.

The most valuable intellectual property are platforms so widely used that everyone else has to use them, too. Think of standard operating systems like Microsoft's Windows or Google's Android; Google's search engine; Amazon's shopping system; and Facebooks' communication network.

Google runs two-thirds of all searches in the United States. Amazon sells more than 40 percent of new books. Facebook has nearly 1.5 billion active monthly users worldwide. This is where the money is.

Google and Facebook are now among the first stops for many Americans seeking news -- while Internet traffic to national newspapers, network television and other news gathering agencies has fallen well below 50 percent of all traffic. Meanwhile, Amazon is now the first stop for almost a third of all American consumers seeking to buy anything. Talk about power.

Whenever markets become so concentrated, consumers end up paying more than they otherwise would, and innovations are squelched. Sure, big platforms let creators showcase and introduce new apps, songs, books, videos and other content. But most of the profits go to the platforms' owners, who have all bargaining power. Which is why writers, musicians, visual artists, photographers, videographers, journalists and other content creators are receiving less and less for their work.

Contrary to the conventional view of an American economy bubbling with innovative small companies, the reality is quite different. Big Tech's sweeping patents, standard platforms, fleets of lawyers to litigate against potential rivals and armies of lobbyists have created formidable barriers to new entrants.

This is one reason the rate that new businesses have formed in the United States has slowed markedly. Between 1978 and 2011, as the new giants gained control, that rate was nearly halved.

The patent system is crucial to this slowing of innovation. The law gives 20 years of patent protection to inventions that are "new and useful," as decided by the Patent and Trademark Office. But the winners are big enough to game the system. They make small improvements warranting new patents, effectively making their intellectual property permanent.

Related Topic(s): Capitalism Over Humanity; Technology, Add Tags
Add to My Group(s)
Go To Commenting
The views expressed herein are the sole responsibility of the author and do not necessarily reflect those of this website or its editors.