Yesterday I paid about thirty dollars at the local service station and bought ten gallons of gas..

At least I believe I did.

But why not suspect that the manager of the gas station cheated me? Might he not have rigged the pump to show more gallons than I actually got? How would I know that he had not done so?

Well, actually I do know that I wasn't cheated. And why? Because of a label attached to the gas pump. That label tells me that The State of California has examined and validated the accuracy of 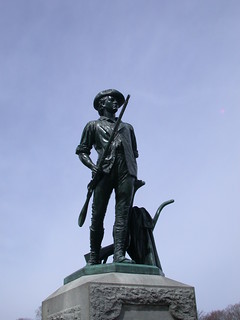 Minute Man, Concord MA
(Image by leewrightonflickr)   Details   DMCA
the pump. And the station manager knows full well that if he nonetheless attempts to override that inspection and thus to cheat his customers, he might be spending considerable time in the state slammer.

Most ordinary citizens would call this threat of sanction as a legitimate function of government, as so-called "Consumer Protection."

Conversely, libertarians, and their fellow-travelers in the right wing of the Republican Party, might regard this as "big government regulation of the free market." No need for that inspection, they tell me. "The invisible hand of the free market" will see to it that I am not cheated.

On the other hand, those who regard the government as an oppressor, call them "libertarians," will nonetheless concede that there are at least three indispensable functions of government, namely the protections of individual life, liberty and property. However, all other functions are illegitimate restrictions on individual "liberty" and thus should be eliminated.

So which is it? Is Government a protector or an oppressor? Is it good or is it evil?

What a silly question! It's like asking, "is fire good or is fire bad"?

The only sensible answer to both questions is: "sometimes good and sometimes bad." Or simply, "it depends."

The founders of our Republic were well aware of this: When government is good, it is fulfilling the functions enumerated in the Prologue to the Constitution of the United States: "to form a more perfect Union, establish justice, insure domestic tranquility, provide for the common defence, promote the general welfare, and secure the blessings of liberty to ourselves and our posterity,..."

And when government is bad, the Declaration of Independence provides a remedy: "To secure these Rights, Governments are instituted among Men, deriving their just powers from the consent of the governed, That, whenever any Form of Government becomes destructive of these ends, it is the Right of the People to alter or to abolish it, and to institute new Government."

Governments are never perfect -- no human institution is. The libertarian's answer: reduce government to the essential function of protecting life, liberty and property -- nothing more. Taxation to support any other governmental activity -- education, unemployment insurance, scientific research, infrastructure investment, national parks and forests, etc. -- amounts to an illegitimate "taking" of property, or simply put, "theft."

The liberal's remedy for governmental imperfections: improve it or, if necessary, replace it.

One of the foundational principles of libertarianism was articulated by John Stuart Mill: "over himself, over his own mind body and mind, the individual is sovereign." ("On Liberty"). According to this principle, it is no business of government to interfere with one's choice of religion (or no religion), with what one might read, with who one chooses to marry, or with a woman's right to control her own body. I have little dispute with this aspect of libertarianism.

Dr. Ernest Partridge is a consultant, writer and lecturer in the field of Environmental Ethics and Public Policy. Partridge has taught philosophy at the University of California, and in Utah, Colorado and Wisconsin. He publishes the website, "The (more...)

Related Topic(s): Freedoms; Libertarianism; THE END OF FREEDOM, Add Tags
Add to My Group(s)
Go To Commenting
The views expressed herein are the sole responsibility of the author and do not necessarily reflect those of this website or its editors.

Debate Creationism vs. Evolution? Why Bother?

Bungling Toward Oblivion -- A Letter to My Friends in Russia

Can the GOP Steal The Election Again? You Betcha!

"Country First?"  The Question of Loyalty

Let's End the New Cold War Before it Heats Up