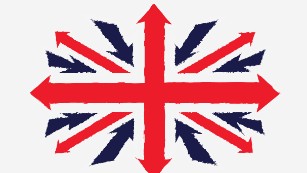 At this writing, securities markets and the international community are reeling at the news that British voters have opted to leave the European Union. The "Brexit" has provoked angry reactions from the pro-Remain camp, who accuse Leave voters of stupidity, shortsighted ignorance and, worse, thinly-disguised racism and nativism posing as nationalism.

Political analysts point out that British voters were divided geographically -- Scotland wanted to stay, England wanted to leave -- as well as demographically. One chart that managed to go semi-viral online displayed high support for the Brexit among older voters, opposition among the young, alongside the actuarial average years remaining that each age group would have to live with the consequences of the vote. The smartest of these pundits focus on the class divide between shiny expensive youth-oriented cities like London, where pro-European sentiments are strong, and England's version of the Rust Belt, abandoned hellholes where citizens barely subsist in a ruined landscape of shut down factories and widespread unemployment.

Amid all the concern about a collapsing British pound and the possible dissolution of not only the European Union -- looks like France and the Netherlands may have a similar plebiscite in the near future -- but also the United Kingdom, everyone's out to cast blame. However, no one is pointing at those who are most responsible if (and it's far from certain) Brexit leads to an economic downturn and/or a political debacle: the West's incompetent political class, and its idiotic enablers in the corporate media.

The postwar order began to fray during the 1970s, when business leaders and their allies in government started to push aggressively for policies that encouraged the transfer of manufacturing industries to the developing world away from what was then called the First World in preparation for what we now call the information economy. Globalization is the shorthand term for deindustrialization -- some call it outsourcing, others prefer the simpler "shipping jobs overseas" -- and digitalization of culture and intellectual property.

This essay isn't about whether globalization is good or bad. It's about the way a trend that has been consistently declared irreversible has been poorly managed. That mismanagement led to the Brexit, and may elect Donald Trump.

Even during the 1970s, globalization's downward pressure on wages was easy to foresee. Capital was becoming increasingly fluid, crossing borders with incredible ease in search of places and people where the production of goods and services could be done as cheaply as possible. If you own a factory in Michigan, and you can figure out a way to transport your product to market at reasonable cost, doing the patriotic "made in USA" thing feels like leaving money on the table when you consider what your expenses would look like in Vietnam or Indonesia.

Workers, on the other hand, are confined by international borders, linguistic and cultural limitations, family ties, and just plain inertia, to the nations -- and often the regions within those countries -- where they were born. If the highest wages in the world are paid in the United Arab Emirates, you can't just hop on a plane and expect to find a job, much less a work permit. Workers are stuck; capital moves freely. This economic imbalance between labor and management is a significant contributing factor to the decline in real median wages in countries like Great Britain and the United States since the 1970s.

Now let's say that you're a high-ranking member of the ruling class: a Fortune 500 CEO, a head of state, a congressman, the publisher of a big-city newspaper. You don't need a major in history or political science in order to anticipate that subjecting tens of millions of people to long-term unemployment and underemployment is a recipe for social dysfunction and the kind of class resentment that can be exploited by a demagogue or radical populist movement.

You can do one of two things with that knowledge. You can ignore victims of economic dislocation. Or you can help them.

That's what happened during the 1980s, when Margaret Thatcher and Ronald Reagan dismantled the post-World War II social safety nets. Precisely at a time when the UK and the US needed more welfare, national healthcare and public education programs, they slashed them instead. Those austerity policies continued under Tony Blair, Bill Clinton, David Cameron, and -- against reason and common sense -- under Barack Obama after the 2008 economic meltdown.

The British and American political classes made a conscious decision over the last 40 to 50 years not to lift a finger to help those who lost their jobs to deindustrialization and globalization. Go back to college, they say. Get retrained. But most Americans can't afford college tuition -- the jobless least of all! We need(ed) a GI Bill for the dispossessed.

Even this week, many establishment types continue to criticize aging pensioners and unemployed workers over age 50, denigrating them as selfish, clueless, unwilling and unable to adapt themselves to the new -- brutal -- world in which we find ourselves.

No doubt: nativism and racism played a role in the Brexit vote. England is an island nation with an island mentality. Though only a few thousand Syrians entered the UK last year, with nary a passport check, images of refugees riding the roof of trains from France through the Chunnel felt like an invasion to some Britons. But bigotry shouldn't let us ignore the economic factor. When jobs are plentiful and salaries are rising, no one minds immigration. Xenophobia grows in the soil of scarcity.

Related Topic(s): Austerity; Brexit; Economic; Refugees, Add Tags
Add to My Group(s)
Go To Commenting
The views expressed herein are the sole responsibility of the author and do not necessarily reflect those of this website or its editors.