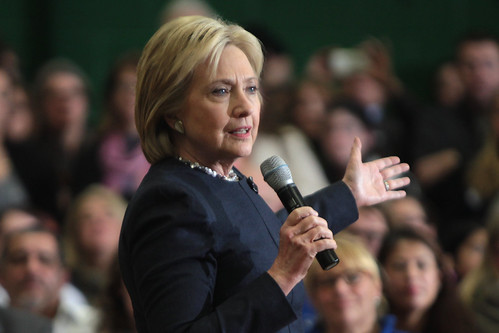 Fear, particularly irrational fear, can be its own path to mayhem.

Hillary Clinton is many things, and is nothing if not determined. However nothing can be accomplished if she is painted as abjectly evil. That she is not. But there are problems. Those problems can be clearly defined. By defining the problems they can be understood and addressed.

Progressives are angry at this stage. A real progressive candidate mounted an historic bid for the presidency. He was railroaded by a system and by a Democratic Party that sees progress and justice as a threat to their power.

What fuels the anger more than anything else is a sense that the voice of progressive-Democratic voters was subverted by the DNC and the corporate media. It's a lot to be angry about, and righteously so.

In fact the Republican process was, in totality, actually more democratic by default, owing to the failure of the RNC to derail their insurgent candidate, Donald Trump. Although try they did.

Nonetheless anger, its origin not withstanding, can be a powerful driving force. However as a core strategy for achieving progress and justice it will certainly be a failure.

Hillary Clinton will be the 45th President of the United States. Donald Trump's campaign will fail, ultimately because he is Donald Trump and that will prove insurmountable. That and the fact that Hillary Clinton is far more qualified and emotionally stable.

Now would be an excellent time to begin the process of understanding Hillary, light and dark, and what she is likely to do and not do. Hillary Clinton is not the devil. She is a corporate Democrat. Who incidentally clings to the notion, despite all evidence to the contrary, that she is a progressive. Which could prove quite a useful delusion.

The question on the table is do you want progress and social justice? Further, would you sacrifice your anger to achieve those goals?

The first big material problem with Hillary Clinton is her willingness to accept the dictates of America's wealthiest, most powerful, and most corrupt. Typically referred to as "Wall Street barons" or "the 1%," they are in fact evil, even if she is not.

Think of Wall Street as a marketplace for everything that is wrong with humanity. Essentially Wall Street commodifies everything. War is not a blight on humanity; it is a commodity to be bought, traded, and most importantly profited from. It's all a big numbers game. There is no line in the spreadsheet for suffering.

Related Topic(s): Democratic; Hillary 2016; Policies; Wall Street, Add Tags
Add to My Group(s)
Go To Commenting
The views expressed herein are the sole responsibility of the author and do not necessarily reflect those of this website or its editors.