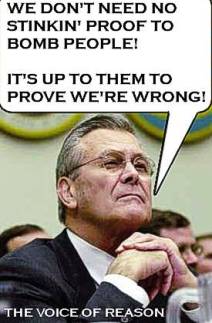 Any treaty that prevents the spread of nuclear weapons is a good thing. To oppose such a treaty is irrational, political, or both. Many members of Congress seem more willing to represent the wishes of Bibi Netanyahu than the American people, which, some might argue, is treasonous. Mr. Netanyahu is the only world leader to oppose a treaty with Iran that would limit nuclear weapons, and has done his best, including appearing before the US Congress, to sabotage the potential agreement. Limiting the spread of nuclear weapons would be wonderful thing for Iranians, Americans, and all people around the world, and opposing such a treaty defies logic.

That said, the attempt to demonize Iran and sabotage the treaty must be analyzed.

Iran has not invaded anyone for almost 300 years.

Iran has signed the Nuclear Nonproliferation Treaty, and has succumbed to more inspections than any country on earth.

Iran does not have a nuclear-weapons program, a fact supported by every intelligence agency in the US and the world.

Iran has publicly stated on numerous occasions they do not want nuclear weapons, as they are considered to be immoral weapons.

Iran has requested a proposal for a Nuclear-Free Middle East.

On the other hand the US must be analyzed as well.

The US has used atomic bombs twice.

According to historian William Blum, the US has bombed more than 30 countries since the end of WWII.

According to Wikipedia, the US has, either covertly or overtly, overthrown more than 20 governments since the end of WWII, with one of those being a democratic government of Iran in 1953.

The US has bombed 14 Muslim nations.

The US has over 700 military bases around the world.

The US has repeatedly opposed and killed the concept of a Nuclear-Free Middle East.

Related Topic(s): Anti-iran Campaign; Anti-iran Propaganda; IRAN NO NUKES; International Treaty; Iran; Israel; Israel Nukes; Israeli Iran Conflict; Meddling In Iran; NPT; (more...) Non-Proliferation Treaty; War On Iran, Add Tags  (less...)
Add to My Group(s)
Go To Commenting
The views expressed herein are the sole responsibility of the author and do not necessarily reflect those of this website or its editors.