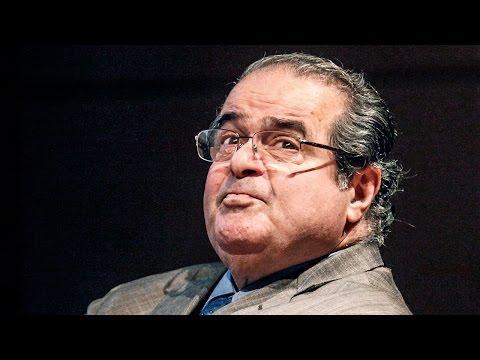 Justice Scalia May Have Gone Completely Nuts Antonin Scalia's dissenting opinion in King v. Burwell shows that the man has virtually no clue what he's talking about anymore. But what's even worse than ...
(Image by The Ring of Fire, Channel: golefttv)   Details   DMCA
Justice Antonin Scalia who died February 13, 2016

Now that Antonin Scalia has departed the scene, what does his passing portend not only for SCOTUS but the country as a whole?

First things first. Obama has to select a nominee. But the Repubs, who reacted to Scalia's death denouncing any choice Obama would make seemingly while Scalia's body was still warm, as unacceptable with Senate Majority Leader Mitch McConnell saying, "this vacancy should not be filled until we have a new president".

We can forget the former "protocol" whenever a supreme dies it's the sitting president who selects his replacement. With SCOTUS so completely politically split on almost every issue McConnell and his Repub henchmen will do anything to inject any procedural roadblock to halt any Obama nominee-no matter how qualified- from being approved by the Senate.

The Senate is a maze of procedural rules that only a wonk could decipher. Here is what this writer can decipher.

As for SCOTUS, any new nominee for the Court must get 60 Senate votes in order to be confirmed-rather than a simple majority of 51 which is the case for all other lower court appointees.

What's rather crazy is when each new Senate term begins in January after a November election they could change all its rules. Technically it's a blank slate.

Au contraire, though threats are made for invoking the "nuclear" option whereby the Senate Leader in the first days of the new term could change the rules and ask for a simple majority vote on all legislation as well as appointments including nominees for SCOTUS it hasn't been done simply because of the fear in subsequent years the other party could become the majority making it easier for them to pass more partisan legislation opposed by the new minority.

Presently, for any legislation to pass in the Senate it takes a super majority of 60 votes because the minority could always threaten to filibuster legislation advanced by the majority-thus this threat alone keeps legislation hostage to the minority- an absolute betrayal of majority rule in a democracy.

But enough digressing on the myriad ways of the Senate. Back to Scalia's replacement.

Whether McConnell and his Repub crazies will block Obama's nominee until after he leaves office is certainly not a done deal.

Other considerations come into play. The Repubs currently hold a 54 seat majority in the Senate. Twenty Four Repub seats are in play in November.

So even if Obama's nominee is blocked in the current session the Senate majority could easily turn Democrat in November thereby reducing McConnell to being the Minority Leader having essentially no say on Scalia's successor.

His obstructionism will certainly be a presidential election issue hurting any Repub presidential hopeful of winning the White House.

The Democrats will surely tie the obstructionism rope around McConnell's and his other Senate crackpots necks though they may still hold to their obstruction and commit "suicide" in the process losing its Senate majority and also scuttling any Repubs presidential chances in November.

Still with all this "nonsense" possibly about to happen, the bottom line is getting a 5th member of SCOTUS approved that will change the makeup of the Court to a left leaning majority that can begin to undo the damage of the Roberts led mob that had Scalia as one of its hit men.

From here the biggest fraud they committed was siding 5 to 4 in the Citizens United case in January 2010 that essentially created an avalanche of big money which completely corrupted the electoral process in all elections, local, state as well as federal.

Retired. The author of "DECEIT AND EXCESS IN AMERICA, HOW THE MONEYED INTERESTS HAVE STOLEN AMERICA AND HOW WE CAN GET IT BACK", Authorhouse, 2009
Related Topic(s): Corruption; Fraud; Hope Hopefulness; McConnell-Mitch; Obstructionism; Senate, Add Tags
Add to My Group(s)
Go To Commenting
The views expressed herein are the sole responsibility of the author and do not necessarily reflect those of this website or its editors.