Few things produce darker and more warped comedy than when the U.S. government launches new propaganda campaigns to "win the hearts and minds of Muslims." Remember when George W. Bush dispatched his longtime political aide, Texas' Karen Hughes, to the Middle East as a State Department official to change Muslim perceptions of the U.S. and that promptly (and predictably) resulted, as Slate put it, in a "jaw-dropping display of ignorance and malapropism that made her the laughing stock of the region"?

In fairness to Hughes and the State Department, she was vested with an impossible task. How do you convince the people of that region to like you when you've spent decades bombing, invading, and droning them; arming and propping up the tyrants who suppress them; lavishing Israel with the weapons, money, and U.N. cover used to occupy and brutalize Palestinians; and just generally treating their countries like your own private plaything for war and profit?

As a 2004 Rumsfeld-commissioned study about the causes of Terrorism put it: "Muslims do not 'hate our freedom,' but rather, they hate our policies," in particular, "American direct intervention in the Muslim world," our "one-sided support in favor of Israel," support for Islamic tyrannies in places like Egypt and Saudi Arabia, and "the American occupation of Iraq and Afghanistan." As a result, trying to change Muslim perceptions of the U.S. without changing U.S. policies of imperialism and militarism is the ultimate act of futility. 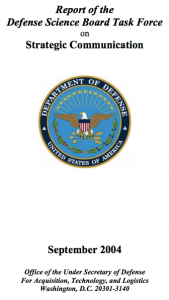 Destined though they are to fail, the propaganda efforts don't have to be quite so comically bad: The government could, for instance, put people in charge of these campaigns who actually know something about the part of the world they're trying to propagandize. Yet these efforts seem only to get worse. One of the most embarrassing tactics is when the U.S. government (and its media allies) select people whom they hold out to the Muslim world as the people they ought to follow; invariably, the U.S.'s selected "leaders" spout views and engage in conduct more anathema to the overwhelming majority of Muslims than the U.S. government itself is.

Related Topic(s): Mind Control; Muslim; Propaganda; State Department; Terrorism, Add Tags
Add to My Group(s)
Go To Commenting
The views expressed herein are the sole responsibility of the author and do not necessarily reflect those of this website or its editors.