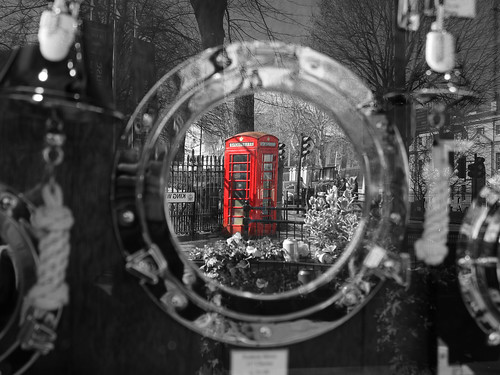 London in the rearview mirror #Brexit
(Image by Carlos ZGZ)   Details   DMCA
>What the hell has happened to them? Have they gone crazy? The British, of all people?


I have always been an Anglophile. Even as a youngster, when I was a member of a terrorist organization devoted to driving the British out of our country. At the time I was working in a lawyer's office which had English clients. I liked most of them. (For us colonials, they were all "English.")

The British always struck me as a highly rational people. Self-controlled, moderate, averse to shows of emotion.

And here they are, making a quite irrational decision on a matter of historic importance, letting their aversion for "foreigners" guide and misguide their vote.

THE VERY occasion was as un-British as can be.

The British pride themselves on having invented modern democracy. Their "elite" never had any illusions about the common man (and much later, common woman). British voters did not make fateful decisions. They elected people much more competent than themselves to make the fateful decisions, people educated for the job. Actually, people born for the job.

The democratically elected leaders of the British people often had a thinly veiled contempt for the people who elected them. The quintessential British leader, Winston Churchill, famously said that "the best argument against democracy is a five-minute conversation with the average voter."

Therefore, any kind of a plebiscite is strictly against the character of British democracy. A referendum is an invitation to irresponsibility. A person follows their fleeting emotions, they may vote for the opposite the very next day -- when it is too late. A vote for "yes" or "no" on the spur of a moment can be quite random for a lot of people -- certainly when the result hangs on 1% or 2%. (A referendum should at least require a 75% or 60% majority.)

Last week's referendum showed why referenda are irresponsible. A majority -- although a tiny majority -- of the British voted democratically to leave the European Union.

Why, for God's sake?

By now, thousands of commentaries have been broadcast and printed. Thousands of explanations have been put forward. But in the end it boils down to one thing: the British were fed up with all those Frogs and Huns and other "Foreigners," who want to tell them what to do for their own good.

To hell with them.

I vividly remember a wonderful British poster after the fall of France in 1940: "Alright then, Alone!" British people of my generation will forever remember the spirit of that slogan.

But this is not 1940. The world has moved on. The world is continuing to move. The "Brexit" may be a nice toy to play with. But it is disastrous.

OF ALL the many explanations put forward for this decision, the most convincing one is that throughout the democratic world there is a growing distaste, even aversion, for the existing political establishment.

Related Topic(s): Brexit; Democratic; Nationalism, Add Tags
Add to My Group(s)
Go To Commenting
The views expressed herein are the sole responsibility of the author and do not necessarily reflect those of this website or its editors.