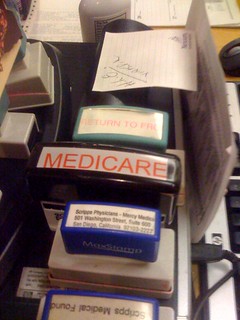 What's in it? Who does this affect short- and long-term? Who's going to pay for it (and who is not)? It should go without saying that these are among the key questions reporters ought to tackle whenever the House or Senate passes a bill. Coverage of the "doc fix" bill passed by the House last week, unfortunately, did not adequately address these critical points. This is a bill that--in addition to reauthorizing the Childrens' Health Plan (CHIP) for two years and permanently fixing the way doctors are reimbursed for Medicare patients, both of which were widely covered-- brings other far-reaching changes to Medicare. Yet reporting on the politics and maneuvering behind the bill was easier to come by than coverage that sufficiently explained the policy changes the legislation prescribes, who will pay for them, and the full range of consequences in years to come--as is too often the case. (I'm reminded of coverage of December's "Cromnibus" bill that wiped out pension benefits to union workers who were already receiving them, and of the 2013 "fiscal cliff" deal that stopped development of new co-op insurance companies to compete with the industry giants.)

The coverage this time ranged from perfunctory (this LA Times piece, for example, is stingy on what the bill really means for current and future Medicare beneficiaries) to factually incorrect (USA Today flubbed the income number at which this bill would have Medicare recipients begin paying higher Part B premiums in 2018--it's $133,000 not $85,000). As for putting this bill into a larger context? There were mostly just hints, like a line in this Wall Street Journal piece that conservatives agreed to the bill even though it adds to the deficit because "they saw an even more important prize: an effort to rein in an entitlement program." (I've written extensively on this).

So, what does the bill--which the Senate takes up again in two weeks and will likely approve--change for Medicare beneficiares? In a nutshell:

- More skin in the game for Medicare beneficiaries. Out-of-pocket costs will go up for some of them. No one eligible for Medicare in 2020 will be able to buy coverage for the Part B deductible which applies to physician and out-patient services. These changes open the door for restructuring the program and perhaps drastic cost-shifting down the road, such as high limits on out-of-pocket costs and very large deductibles. Some policymakers on both sides want Medicare to be more similar to the insurance people have on the commercial market that increasingly comes with high deductibles and much more cost sharing.

- More means-testing of Medicare premiums. All beneficiaries paid the same premiums until 2006, then Congress changed the law to make individuals with adjusted gross incomes of $85,000 ($170,000 for couples) pay more. The current bill changes the rules again so that some people already paying higher premiums will pay more. The president's budget proposal would have pushed even more seniors into the higher income pool until one quarter of all beneficiaires were paying higher premiums. Stacy Sanders, federal policy director for the advocacy group Medicare Rights Center, told me recently, "This is problematic because eventually middle class people would pay more. If the president's proposal were implemented today, beneficiaries with incomes around $45,000 in today's dollars would pay higher premiums."

The answer to the question of "who or what pays for" the House's $214 billion bill, then, is cuts to Medicare befeficiaries, to the tune of $35 billion, along with equal cuts in payments to providers, with the rest--some $140 billion--added to the deficit over the next decade. Other stakeholders like drug companies and insurers took no financial hit. (For just one piece of perspective, as Charles Ornstein reported for ProPublica on Sunday, "Medicare spent $4.5 billion last year on new, pricey medications that cure hepatits C--more than 15 times what it spent the year before on older treatments for the disease, previously undisclosed federal data shows.") How did legislators decide which stakeholders would be billed and which spared? The media did not explore this question or the question of whether making seniors pay more for their care was the only--or optimum--route to funding the "doc fix." Reporters also failed to examine the ramifications of the skin-in-the-game theory of cost control--if patients have to pay more out of pocket, they won't got to the doctor as much. (Studies by The RAND Corp. have found that although they do use fewer services, they can't discriminate between necessary and unnecessary care and that, of course, can lead to more costly care in the end.) What does this cost-shift look like in practice for affected Medicare beneficiaries? There are stories here.

This is admittedly difficult terrain to cover--it is complex, not to mention a potential turn-off for less wonky readers. But it matters to the financial future of everone who is on the program now and who will be on it some day. And there is still time for reporters to dive in on this. Congress is back in session in two weeks, and this bill is in the Senate's lap.

Trudy Lieberman, a journalist for more than 40 years, is a contributing editor to the Columbia Journalism Review where she blogs about health care and retirement at www.cjr.org. Her blogposts are at http://www.cjr.org/author/trudy-lieberman-1/ She is also a fellow at the Center for Advancing Health where she blogs about health at (more...)
Related Topic(s): CHILDRENS HEALTH CARE; Health; Medicare, Add Tags
Add to My Group(s)
Go To Commenting
The views expressed herein are the sole responsibility of the author and do not necessarily reflect those of this website or its editors.

Report Card on Social Security Trust Fund Coverage - An F for the headlines; a C- for the stories