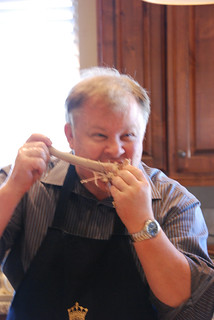 Here's something (not) to look forward to: Thanksgiving dinner with your family in the time of Trump.

This week you're heading home to spend quality time with your family. Of course, your right-wing brother-in-law (RWBIL) is going to be there, spouting off quotes from Trump and Rush and fully Foxified. Actual facts will not be present at this table and would not penetrate the Drudge-shield if they were, but conspiracy theories will abound. Brace yourself.

Don't be surprised if your RWBIL immediately gets right in your face, loudly proclaiming, "Merry CHRISTMAS," with an emphasis on "Christmas" and jumping on you if you dare say, "Happy Holidays." He has not just finally gone crazy, there's a (crazy) reason he will be doing this. Fox News, Rush Limbaugh and the rest of that crowd are telling him (and telling him and telling him and telling him -- you know how they repeat things) that Starbucks is anti-Christian because their traditional, seasonal red cups are " red this year. But they took off the snowflakes and Santa Clauses, etc. So obviously Starbucks is part of the liberal "war on Christmas."

The right-wing cure for the "war on Christmas" is to make everyone say "Merry Christmas" instead of "Happy Holidays," and feel all victimized if they don't. People who are Jewish, Buddhist, Hindu, atheist, vegetarian, etc. -- they are obviously all liberals.

Climate Change Is A Hoax

Your RWBIL is absolutely going to claim that climate change is "a hoax." You see, it's snowing somewhere, so obviously the planet could not be warming. In fact, these days it's possible you are having one of those once-a-century storms again this year, which, to him, proves that the climate is not changing. All of those scientists who say the climate is changing are getting money from "the government" which is of course paying them to "destroy capitalism" by impeding oil company profits.

This year there's a good response. You see, it turns out that Exxon's own scientists were warning management that their product is helping to cause our planet to warm "catastrophically," and that if this continued it "could eventually endanger humanity." But Exxon chose not to tell this to its investors or the public. Instead the company and others funded a massive campaign to use the "tobacco model" to turn people against their own government and deceive people into thinking the "science is uncertain" and the "jury is still out," or even that "climate change is a hoax."

So let your RWBIL know that even Exxon's own scientists are warning that we must stop putting carbon into the atmosphere.

Your RWBIL is going to claim that "tax cuts increase revenue," taxes and government "take money out of the economy," and that budget cuts (which actually take money out of the economy) and the resulting layoffs of teachers, police, and other public employees will "create jobs." Just roll your eyes at these. It won't do any good at all to look at what actually happened when right-wing governments have done these things, actual facts will not penetrate the "Fox Effect" and the "Drudge Shield."

Here is one you can try, though. When your RWBIL says that so many people are on food stamps and other public assistance because they are lazy and don't want to work, and then says the "real reason" the unemployment rate is low is that the "Obama Economy" is so bad that people have given up looking for work. You can just ask him, "So which is it? Are there jobs that people won't take, or is unemployment really higher than they are reporting?"

You can also ask if all those people would still be on assistance if the minimum wage was raised to $15 an hour.

OK, I have bad news for you on this one. Thursday might be a very unpleasant day if the subject of refugees comes up. You've probably seen or heard what is going on -- the Republican Party has taken a very, very, very dark turn in recent weeks. In the past conservatives have expressed anti-immigrant sentiments, saying things like they bring in "diseases." Remember how they even turned on Central American children who were fleeing violence at home?

Related Topic(s): Family; RIght Wing Lies; Theories, Add Tags
Add to My Group(s)
Go To Commenting
The views expressed herein are the sole responsibility of the author and do not necessarily reflect those of this website or its editors.