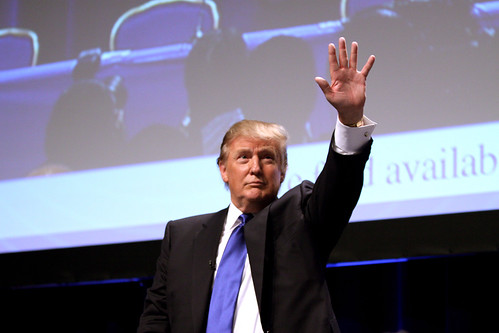 Donald Trump softens his presidential image. He talks soothingly of unifying the country. He calls Obama a good man. He takes off his website his call for "a total and complete shutdown of Muslims entering the United States." He takes off the table his call for mass deportations of 11 million undocumented immigrants. At least according to Republican chairman Reince Priebus, a possible chief of staff in the new administration, Trump will deport only those who have committed crimes.

But even with this Trumpian Kumbaya, his victory is energizing white supremacists, Muslim-bashers, women-haters, anti-immigrant nativists, and evangelicals who believe that America should be a Christian nation. "This is one of the most exciting nights of my life," crowed former Ku Klux Klan leader David Duke, whom Trump had hesitatingly denounced. "Make no mistake about it, our people have played a HUGE role in electing Trump!"

"The election of Donald Trump has emboldened the forces of hate and bigotry in America," writes Nevada's Harry Reid, the outgoing Democratic leader in the senate. "I have heard more stories in the past 48 hours of Americans living in fear of their own government and their fellow Americans than I can remember hearing in five decades in politics."

Trump's win similarly feeds the hatred of Muslims that unites Christian nationalists and neo-fascists across Europe, from Britain's Brexiteers to Russia's increasingly authoritarian Orthodox Christians. "Congratulations to the new President of the United States Donald Trump and to the free American people," tweeted Marine le Pen, leader of France's neo-Fascist Front National, who proudly admits that a Russian bank close to Putin funds her political campaigns.

A Trump White House equally heartens deniers of science, as the know-nothing-in-chief threatens to cripple global efforts to combat climate change. "It's not like we were winning the climate battle before, you know, but we were beginning to make at least a little progress," explains environmentalist Bill McKibben. "Now we're going to hit not a pothole, but a ditch in the road."

Unless massively resisted on both sides of the Atlantic, these dangers could prove fatal. I take that as gospel. But what will the property mogul and reality TV star do in specific hot-spots like long-suffering Syria, with its nearly half-a-million dead and 11 million displaced? Does Trump himself even know? With all his mixed and misleading messages, possibly part of his bargaining strategy with other nations, much of what people think they know will likely turn out to be wrong. Nonetheless, let me stick my neck out. Trump will not be the isolationist his media critics and many European leaders fear.

"America first will be the major and overriding theme of my administration," he announced in his major foreign policy speech in April, echoing the isolationist and often anti-Semitic stance that defined the Republican Party before World War II. He earlier called NATO "obsolete and expensive" and "not meant for terrorism." And, in a New York Times interview in July, he raised questions about whether he would honor commitments to defend NATO countries under attack unless they paid what they had committed.

All this is now old news. By mid-August, Trump vowed to work "very closely" with NATO. "Since my comments," he boasted, "they have changed their policy." Suddenly, he was no longer the isolationist he had only appeared to be. His America will not be militarily absent from the world.

Trump's thinking on this is absolutely mainstream. Just like Hillary Clinton, Barack Obama, and even Bernie Sanders, who has generally followed Obama's lead on both Syria and Iraq, Trump believes that he needs to take out the Islamic State and other jihadis in the Middle East to defend the United States against terrorist attack.

The evidence tells a different story, as many of us at RSN have previously argued. Nine days before last November's terrorist attacks that killed 130 people in Paris, ISIL leaders risked allied airstrikes to bring their senior officials together in the Syrian town of Tabqah, west of Raqqa. There the leadership laid out a decisive shift in strategy. Instead of putting all their efforts into holding the Iraqi and Syrian land in their self-proclaimed caliphate, a task they saw as militarily hopeless, the leadership had already sent hundreds of their European fighters back home to wreak havoc in Belgium, France, Germany, Spain, and the UK.

The United States faces the same threat. Perhaps with Trump in office more Americans will come to realize that his clash of civilization rhetoric and counter-productive military escalation only helps Islamic State and its competitors to recruit even more terrorists to their cause.

Trump differs with current thinking in Washington on one key aspect. He wants to seek an agreement with Russia that will leave Bashar al-Assad's brutal regime in power and focus on fighting the jihadis. His is not an unintelligent argument. Nor will he simply follow orders as some kind of puppet of Putin, a charge that Hillary Clinton and her supporters have made without any compelling evidence.

Love him or loathe him as I do, Trump remains his own man, as will become clear when he runs into the enormous difficulties of making any deal with Putin work. The Russians back Iran, and are quite happy with the nuclear deal they helped negotiate. Trump and his Republican supporters want to "renegotiate" or simply reject the deal. This alone could be a deal-breaker.

Closer to the bone, the Russians, Iranians, and Syrians oppose as "terrorists" all of Assad's enemies, including the Free Syrian Army that Obama has reluctantly supported and that Iran's Shiite enemies, the Sunni kingdoms of Saudi Arabia and Qatar, will continue to support.

A veteran of the Berkeley Free Speech Movement and the New Left monthly Ramparts, Steve Weissman lived for many years in London, working as a magazine writer and television producer. He now lives and works in France, where he is researching a (more...)
Related Topic(s): Bashar Al-assad; Deportation; Donald Trump Lies; Immigrants; Muslim; NATO; Putin; Syria; Trump Against Climate Change, Add Tags
Add to My Group(s)
Go To Commenting
The views expressed herein are the sole responsibility of the author and do not necessarily reflect those of this website or its editors.