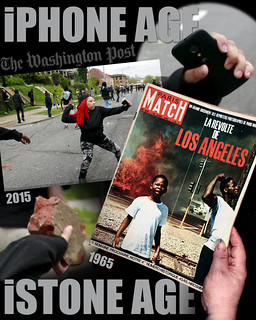 I and a couple of friends stood transfixed with hundreds of others on the corner several blocks from my house in South L.A. watching what seemed like a horrid page out of Dante's Inferno. But this wasn't the classic writer's epic poem. This was real life. Liquor stores, a laundromat, and two cleaners blazed away. There was an ear splitting din from the crowd's shouts, curses and jeers at the police cars that sped by crammed with cops in full battle gear, shotguns flailing out of their cars. There was an almost carnival air of euphoria among the roving throngs as packs of young and not so young persons darted into the stores snatching and grabbing anything that wasn't nailed down. Their arms bulged with liquor bottles and cigarette cartons. I was 18, and there was almost a kid's mix of awe and fascination watching this. For a brief moment there was even the temptation to make my own dash into one of the burning stores. But that quickly passed. One of my friends kept repeating with his face contorted with anger: "Maybe now they'll see how rotten they treat us." By the "they" he meant "the white man." My friend's words were angry and bitter. The words were bitter and in that bitter moment he said what countless other blacks felt as the flames and the smoke swirled around me.

The events of those days and his words still remain burned in my memory on the fiftieth anniversary of the Watts riots this August. I still think of the streets that we were shooed down by the police and the National Guard during those hellish days. They're impossible to forget for another reason. A half century later some of those streets look as if time has stood still. They are dotted with the same fast food restaurants, beauty shops, liquor stores, and mom-and-pop grocery stores. The main street near the block I lived on then is just as unkempt, pothole-ridden and trash littered. All the homes and stores in the area are all hermetically sealed with iron bars, security gates and burglar alarms.

In taking a hard look at what has changed in America's Watt's in the half century since the Watts riots fifty years ago, Marquette Frye, the twenty-year old motorist whose arrest sparked the riots, name has been replaced by these names: Trayvon Martin, Michael Brown, Tamir Rice, Eric Garner, Ezell Ford, and Sandra Bland. They have one thing in common with Frye. They were young, black, and like Frye, became the national poster names for police victimization of blacks. The clock on this chronic national plague has seemingly stood still. However, this is only one benchmark of how much or how little progress has been made since the Watts riots on confronting racial ills and poverty in America.

Certainly many blacks have long since escaped from the corner in South L.A. such as the one I stood on amidst the flames and chaos a half century ago. Their flight was made possible by the avalanche of civil rights and voting rights laws, state and local bars against discrimination, and affirmative action programs that for many of them crumbled the nation's historic racial barriers. The parade of top black appointed and elected officials, including one president, the legions of black mega millionaire CEOs, athletes, entertainers, and the household names of blacks from Oprah to Bob Johnson is unarguable further proof of that.

However, there's the other hard reality that more blacks still languish on corners like the one I stood on in August, 1965. For them there has been no escape. A comparative look at conditions in Black America in 1965 and today tells their tale.

*In 1965, the wealth gap between black and white was a shade under $20,000; in 2015 it has leaped to more than $27,000. The black--white gap in homeownership has nearly doubled between 1965 and 2015. Today, nearly half of black children live in neighborhoods with concentrated poverty. Overall, nearly one-third of blacks live in poverty; that's a figure nearly triple that of non-Hispanic whites.

Earl Ofari Hutchinson is a nationally acclaimed author and political analyst. He has authored ten books; his articles are published in newspapers and magazines nationally in the United States. Three of his books have been published in other (more...)
Related Topic(s): Discrimination; Police; Poverty; Riots, Add Tags
Add to My Group(s)
Go To Commenting
The views expressed herein are the sole responsibility of the author and do not necessarily reflect those of this website or its editors.