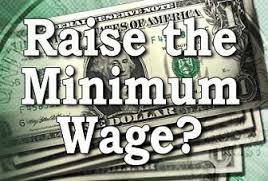 How much does it take to get by where you live? A new report concludes that current federal minimum wage of $7.25 per hour doesn't come close, anywhere in the United States. It takes more than $15 per hour to earn a living wage in most states. When you throw in the rising cost of student debt, low-income Americans are even further underwater.

The report, "Waiting for the Payoff: How Low Wages and Student Debt Keep Prosperity Out of Reach (pdf)," was issued this week by the People's Action Institute. Among its findings:

* It takes more than $15 per hour to earn a living wage in 42 states and the District of Columbia. That figure is over $16 in more than half of the country, comes to nearly $20 per hour in California, and is more than $20 in New York state.

* Arkansas had the lowest hourly rate of any state, but at $14.58 per hour it was barely below the $15 per hour minimum proposed by Fight for 15.

* The situation is even more dire for working parents. A single adult with two children needs more than $26 per hour to get by in South Carolina, more than $41 per hour in New York state, and nearly $44 per hour in Washington DC.

What's the price of a dream? For people who saw college as the way to a better life, this country's student debt crisis offers a harsh answer. More than 43 million Americans now carry some level of student debt.

Student loan debt in this country now totals more than $1.3 trillion -- and it's getting worse. Common Dreams' Deirdre Fulton points to a new study from the Institute of College Access and Success which shows that the average undergraduate borrower now graduates with $30,100 in debt, a 4 percent increase from last year's figure.

Wage discrimination is also a critical problem, both for student debt holders and low-wage workers as a whole. As the report notes:

"... Majors with a high proportion of white males, such as computer and information sciences, see starting salaries of $65,000. At the same time, English and Psychology, which see more women and people of color, have median starting salaries of $35,000 and $32,750 per year, respectively -- lower even than the traditional living wage for a single adult."

Discrimination in hiring and other systemic problems take a heavy toll. For each dollar paid to white male college graduates with degrees, black men are paid 78 cents; Latinos are paid 81 cents; black women are paid 72 cents; and Latinas are paid 69 cents.

Related Topic(s): College; Domestic Workers; Financial; Jobs; Minimum Wage, Add Tags
Add to My Group(s)
Go To Commenting
The views expressed herein are the sole responsibility of the author and do not necessarily reflect those of this website or its editors.