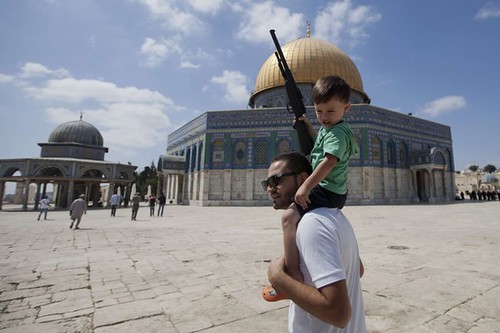 A Palestinian man carries on his shoulders a child holding a fake gun outside the Dome of Rock at the Al-Aqsa Mosque compound.
(Image by Jordi Bernabeu)   Details   DMCA

Israel has just emerged from its three-week high holidays, a period that in recent years has been marked by extremist religious Jews making provocative visits to Al Aqsa mosque compound in occupied East Jerusalem. Many go to pray, in violation of Israel's international obligations. Most of them belong to groups that seek a Jewish temple to replace the mosque. They now enjoy increasing parliamentary support, some of it from within prime minister Benjamin Netanyahu's party.

A rash of such visits last autumn outraged Palestinians and triggered a wave of so-called lone-wolf attacks on Israelis. The attacks have recently abated.

Taking advantage of the renewed quiet, Israel allowed a record number of ultra-nationalists to visit the mosque. Parties of Israeli soldiers are also entering the site. The police, whose recently appointed commander is himself from the extremist settler community, have recommended that restrictions be ended on visits by Jewish legislators who demand Israel's sovereignty over the mosque.

The gaping power imbalance was movingly detailed last month at a special hearing of the UN security council. Hagai El Ad, head of B'tselem, which monitors the occupation, termed Israel's abuses as "invisible, bureaucratic, daily violence" against Palestinians exercised from "cradle to grave."

He appealed to the international community to end its five-decade inaction. "We need your help. ... The occupation must end. The UN Security Council must act. And the time is now," he said.

Israeli politicians were incensed. Mr El Ad had broken one of Israel's cardinal rules: you do not wash the country's dirty linen abroad. Most Israelis consider the occupation and Palestinian suffering as an internal matter, to be decided by them alone.

David Bitan, chair of his party, demanded that Mr El Ad be stripped of his citizenship and proposed legislation to ban calls in global forums for sanctions against Israel. Unsurprisingly, Mr El Ad has faced a flood of death threats.

Related Topic(s): Abuse Of Power; Anti-semitic; Benjamin Netanyahu; Israeli Pressure On US; Mosque; Occupation; UNESCO, Add Tags
Add to My Group(s)
Go To Commenting
The views expressed herein are the sole responsibility of the author and do not necessarily reflect those of this website or its editors.