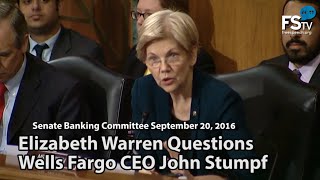 People who came looking for drama in Wells Fargo CEO John Stumpf's Senate testimony on Tuesday did not come away disappointed. Stumpf was called before the Senate Banking Committee after his bank was fined $185 million for opening more than two million accounts in customers' names, without their knowledge or consent, over a five-year period.

We now know that these two million phony accounts, and the 5,300 employees held responsible, may not reflect the full extent of the wrongdoing. Stumpf announced that the bank had agreed to extend its review of its misconduct to 2009 and 2010, and said he would consider reviewing earlier years as well.

Witness for the Prosecution

Stumpf squirmed, shifted and shuffled under the relentless questioning of Sen. Elizabeth Warren (D-Mass.), who asked, "Since this massive year's long scam came to light you have said 'I am accountable.' What have you done to hold yourself accountable? Have you returned one nickel of the money you earned while this scandal was going on?"

When Stumpf gave evasive answers, Warren said, "I'll take that as a no." Warren then admonished Stumpf for "gutless leadership" and said, "You should resign, you should give back the money you made while this scam was going on, and you should be criminally investigated by the Department of Justice and the Securities and Exchange Commission...

"The only way Wall Street will change is if executives face jail time after committing fraud," Warren concluded.

Other senators were also effective. Sen. Sherrod Brown (D-Ohio) worked Mr. Stumpf in a low-key but equally relentless manner, Gregory Peck in "To Kill A Mockingbird" to Warren as Spencer Tracy in "Inherit the Wind."

In one of the most newsworthy (yet under-reported) exchanges of the day, Sen. Brown asked regulators Thomas Curry of the Office of the Comptroller of the Currency and Richard Cordray of the Consumer Financial Protection Bureau (CFPB) whether they had made any referrals to the Justice Department for criminal investigation.

Curry suggested that he is more interested in civil cases but Cordray, who made it clear he could not legally answer in the affirmative, implied strongly that the answer was "yes."

Brown also pressed Stumpf to reconsider the termination of employees for failing to meet cross-selling targets the bank now agrees were unreasonable. And in a "wonky" but very important point, Brown pressed Stumpf to waive the arbitration terms in Wells Fargo's customer service agreements. Stumpf was characteristically evasive on both questions.

"You created a culture of cross-selling that pushed everybody to the maximum," said Merkley, "and the casualties are these folks that were going to be fired because they'd lose their jobs if they couldn't meet (their targets)."

Merkley also pressed Stumpf on his failure to disclose the existence of the fraudulent accounts to investors, tying it to Stumpf's legal obligations under the Sarbanes-Oxley Act. In return, he received the remarkable assertion that this massive fraud was "not a material event" -- even though Wells Fargo's stock price is nearly 6 percent lower than it was before the recent fine was announced.

The CEO did not crack on the stand and admit everything like the villain in a Perry Mason episode. Instead Stumpf -- who seems to lavish as much attention on his public image as Leona Helmsley did on her dog -- traded his persona as a hands-on manager for that of a passive executive who rarely pays attention to detail. It was a portrait of the chief executive as innocent bystander. Excuses rolled down like water, and evasiveness like a never-ending stream.

Related Topic(s): Employees; Fraud; Money; Regulators; Wells Fargo, Add Tags
Add to My Group(s)
Go To Commenting
The views expressed herein are the sole responsibility of the author and do not necessarily reflect those of this website or its editors.