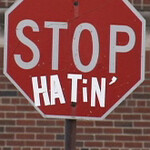 I'm disappointed today. But the wisdom I've acquired while living these 76 years tells me not to fall apart into trembling little pieces. About 59 million of the approximately 200 plus million registered voters decided this election. That's about18 percent of the total population of about 320 million who made this decision for the rest of us. Or to be more precise, that's about 30 percent of the total number of registered voters.

So, what now? For the first time in a long time, we have one party controlling it all. Executive, Legislative and soon the Judicial will be under the control of the Republicans. Two things come to mind. The paralysis in DC should end. This should also end the "blaming the other party" game too. In other words, "Republicans, you now have a clear road to your goals."

What are these goals? Of course, they're the emotion-loaded campaign issues like deporting millions of illegals, stopping Muslims from entering, building the wall at Mexico's expense, eliminating the Affordable Care Act and having 20 million people lose their healthcare, punishing women who have abortions, and ridding business of regulatory interference that protects our air, water, foods, drugs, education, financial health, and privacy (although that last one is already gone). There will be no one to resist the Republican's decisions on these promises. I await their actions with a great deal of anticipation.

So, buck up folks! This is just another sign post in the deterioration of the United States. If you don't believe the American Century was over 16 years ago, this should give you a clue. For those of us who having been watching this trajectory for about three decades know this whole election was just another reminder. The outcome was a bit of surprise, but not a shock. I know that eight years of the excruciating pain of a black family in the White House was just too much for some white people. But Donald Trump? Really?

I would be less than honest if I didn't admit that Hillary was probably the worst candidate the Dem's could have selected. But then I think about the fact that the Dems voters didn't select her. It was the Dem Elite Political machine that did. And of course, I do give her credit for convincing them she had a right to the office.

The real clue to our downward spiral has been in front of us all along. It was the symbiotic relationship of these two candidates. They needed each other to be candidates. If you aren't disturbed that the selection of these two people out of 320 million Americans is the best we could do, go back to sleep. Everything's going to be ok.

Finally, with no Dems to blame for their failed policies, and split loyalties to Trump already existing in the party, it can't be long before they begin to turn on each other. Of course, this won't happen until blaming President Obama for their f*ck-ups loses its effect. Then dolly bar the doors!

Well, it's going to be an interesting four years -- or at least until he does something that causes his impeachment. Congratulations America. We've reached a new low. If this doesn't convince you we need a complete system reboot, you're beyond redemption.