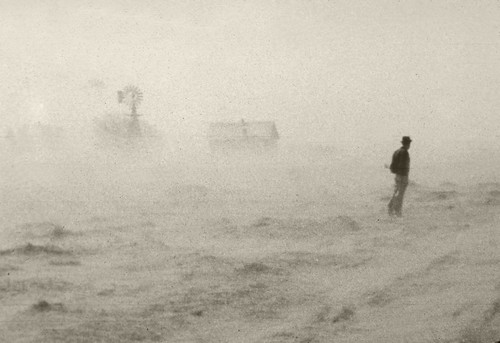 And the men of the towns and of the soft suburban country gathered to defend themselves; and they reassured themselves that they were good and the invaders bad, as a man must do before he fights.

Fear and hatred of the stranger is nothing new, here in this nation of strangers. "Mr. Trump," asked the father of a fallen Muslim American captain, "Would my son have had a place in your America?"

Would any of us have a place in Donald Trump's America?

The voters who helped propel Trump to primary wins across the South seem to have forgotten: There was a time when white Southerners were the strangers, the refugees, the outsiders, the despised immigrants from a dusty and impoverished land.

The name of that land was Oklahoma.

Other states were struck by the dust storms too. But the name they gave the refugees was "Okies," and it stuck. "Good people" in the Western states once hated Okies with the same ferocity Trump's worst supporters have for darker-skinned people today.

In the 1930s, Trump would probably have hated Okies too.

After the dust storms hit, 2.5 million people left their ravaged homes to seek better lives in greener places. By 1940, 200,000 of them had emigrated to California alone.

After just six years, the refugees were nearly 3.5 percent of California's population. They settled in some parts of the state in large numbers, triggering a hate-filled backlash. As Steinbeck wrote:

The local people whipped themselves into a mold of cruelty. Then they formed units, squads, and armed them -- armed them with clubs, with gas, with guns. We own the country. We can't let these Okies get out of hand. And the men who were armed did not own the land, but they thought they did.

And now, old patterns are made new again. From a Vice News report about border vigilantes:

"'Some of them are retired veterans, they're construction workers, they're plumbers,' Rogers said. 'We've had a retired pastor from the Army call the hotline -- they're just regular Joes and Janes from across the United States who want to close the border and bring America back to the place it used to be.'"

Related Topic(s): America Culture Of Violence; American Hypocrisy; Donald Trump; Strangers, Add Tags
Add to My Group(s)
Go To Commenting
The views expressed herein are the sole responsibility of the author and do not necessarily reflect those of this website or its editors.