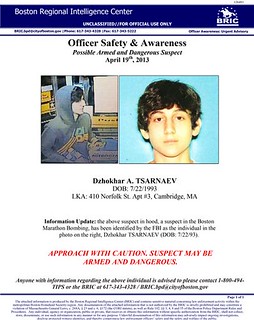 Police Converge Mass
(Image by A Name Like Shields Can Make You Defensive)   Details   DMCA
The daunting task of finding a suitable jury to hear the trial of suspected Boston marathon bomber Dzhokhar Tsarnaev became clear Thursday, as phase-two jury selection turned up many diverse but unsuitable candidates, including a man whose roommates thought it would be 'cool' to serve and encouraged him to vote in favour of execution, and a professor who could only impose the death sentence if "the entire US prison system itself collapsed".
U.S district judge George O'Toole questioned 18 candidates as he sought to impanel an unbiased team of 12 jurors and 6 alternates to determine whether Tsarnaev, 21, is guilty of killing three people and injuring more than 260 in the 2013 marathon attacks, and if so, whether he deserves to die by lethal injection.

The first candidate of the day, an advertising executive, said he was already convinced Tsarnaev "must be guilty".

"I live with several other males my age, a very testosterone-driven household, they think it's very cool that I would get to sentence him to death," said the man to the court.

Another potential juror, a professor of Catholic theology, vehemently opposed to the concept of capital punishment, disqualified himself from service, stating:

"I could not impose the death penalty under any circumstances... should the walls [of the U.S prison system] come down, and we needed to protect innocent lives, only then one could enforce the death penalty", adding any vote for execution would probably prevent him from securing tenure in future.

To serve on the jury candidates must be willing to impose a death sentence on Tsarnaev if they find him guilty.

Massachusetts abolished its death penalty in 1984, but last year, Eric Holder announced the Department of Justice would seek to execute Tsarnaev - against the wishes of the majority of Boston residents.
Filtering through the potentials - "we're meant to have a fair trial"
The candidates probed by O'Toole Thursday had already passed through the first round of selection successfully, which included 1350 possible jurors filling out questionnaires enquiring about their views on capital punishment, and required them to declare any probable ties to the case.

Despite this, the U.S district court in Boston heard from a number of people whose opposition to the death penalty was absolute, others who were sure of Tsarnaev's guilt, "just not the extent of it", a man who's wife cared for the injured after the April 15, 2013 bombing, and several individuals who's relatives were employed as police officers in the city of Boston and surrounding areas.
Walter Prince, a former prosecutor not involved with the case, said, "The questionnaire was designed to filter out some folks, real extreme views on both sides, now you're finding out even more that the questionnaire didn't catch."

Nonetheless, the filtering process is not without its pitfalls and doesn't address the problem of potential jurors withholding information or being untruthful simply because they want to serve - yet know their circumstances or views would likely make them ineligible.

Defense attorney David Bruck became exasperated during the selection process, at one point urging O'Toole to be more specific when questioning candidates about their views on guilt and if they could genuinely vote for life in prison, in the event they found Tsarnaev guilty of grave terrorism charges.

"It doesn't matter whether the juror might vote for life in an unintentional killing because that's not what we're dealing with, we really don't think we're going to have a fair jury unless they're asked," said Bruck.

He went on to argue there was a "pervasive sense" of Tsarnaev's guilt in the courtroom, adding, "This trial is not over already".

Judge O'Toole denied the defense request. "The jurors know that this is about a bombing, they have those specifics already in their minds", said O'Toole.
Several reporters housed in an over-flow courtroom expressed concern when a live feed to the proceedings became temporarily disabled, prompting one to comment, "staff say they can't fix this feed... this public proceeding isn't public...".

Andy Thibault, a Boston columnist, said, "the 'public' proceedings have been marred by video and audio blackouts", adding O'Toole had barred all press from entering the courtroom.

Tsarnaev, who appeared interested and actively engaged with the selection process, is also charged with shooting Sean Collier, an MIT police officer killed three days after the bombings. He has pleaded not guilty to a total of 30 charges, 17 of which carry a possible death sentence.

Jury selection is set to continue Friday. The judge said he expects testimony to begin on January 26.

The author holds a Bsc (hons) Criminal Justice and Social Policy, and has worked extensively within the Criminal Justice System. She now takes a keen interest in investigative journalism with particular emphasis placed on social injustice, the rule (more...)
Related Topic(s): Bomber; Bombing; Death; Execution; Fair; Guilt; Innocent; Juror; Jury; Killing; (more...) Massachusetts; Punishment; Reporters; Terrorism; Tsarnaev, Add Tags  (less...)
Add to My Group(s)
Go To Commenting
The views expressed herein are the sole responsibility of the author and do not necessarily reflect those of this website or its editors.

Beheadings, firing squads and gas chambers: It's not ISIS it's Oklahoma