Donald Trump, President-Select, has come out for a minimum wage of $10 an hour. This from the man who has gold faucets and chairs to flatter his vanity. This from a man who claims 9 billion in net worth and pays no taxes.

This from a man born rich and living in aristocratic splendor.

1 It will undercut the movement for $15 an hour, a living wage.

3. Therefore, the 3 million who will see wages increase, will still be impoverished and subsidized by the taxpayers, in effect corporate welfare as government subsidies replace a living wage.

5. The latest Social Security reports states that the majority (51%) of American workers make less than $30,000 a year. Half of America is a hair above the poverty level, in the richest nation on earth.

7. SS reports that 71% of workers make $50,000 or less, demonstrating that American household stay above the poverty level only by having more than one worker in the household. Two workers in a household (who is taking care of the kids?) who make $12 an hour would make about $50,000 a year. If only one member works, the family is below the poverty level. 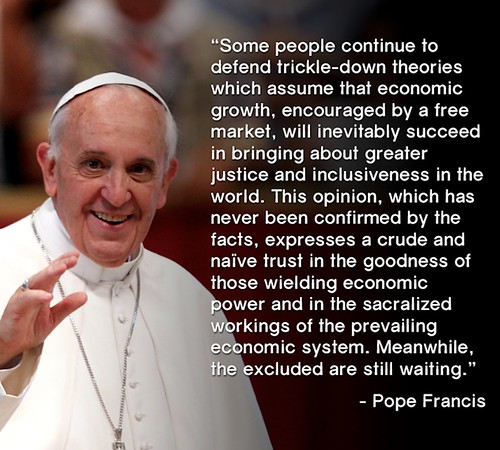 I find it criminal that people who make $15 a second oppose raising the minimum wage to $15 an hour. (without raising a finger: the Waltons, who built nothing and do not work, have more wealth than 100 million working Americans, after inherited he Walmart fortune. Walmart has raised wages from $9 an hour to $10, stilling leaving the vast majority of its workers in poverty and surviving only with government assistance.

The argument against the paying a living wage is that it will lose jobs. This is refuted by studies which show, in areas with higher minimum wages, the economies are booming, as people have more to spend and thus create more jobs, not less.

44% of the homeless (the real forgotten people) have jobs. (BLS)