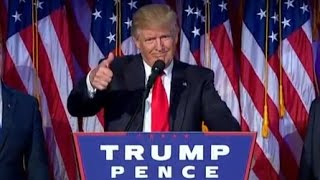 To put it plainly I'm not disgruntled over the outcome of the presidential election. Hillary Clinton isn't going to be president and that's a good thing.

I did not support and vote for Trump but his becoming president is the reality.

Resets-changes in domestic and foreign policy are coming. All the diseased rhetoric of the campaign is over. Good ridden.

Trump working with Russian President Vladimir Putin on Syria appears to be in the works. Trump-according to Pepe Escobar [1] -may be interested in becoming part of the AIIB, Asian Infrastructure Investment Bank, something that could be a major part in his avowed $trillion dollar 10 year infrastructure plan for America.

The TPP investment scheme appears dead. And Trump may dump NAFTA. Two disastrous trade mechanisms that only benefit the big banks and the mega-corporations exercising hegemony over sovereign countries.

A lot of the demonization of Putin by the corporate MSM, the Obama administration, Clinton saying he's the new "Hitler", Poland, the Baltic countries, the post coup Ukraine regime in Kiev may start to subside as the nonsense that it is.

Provocations against Russia, economic sanctions, the phony condemnation over Russia making Crimea part of the Russian Federation-ignoring the referendum by the Crimean people voting to become part of Russia, Putin's aiding the Russian speaking people in eastern Ukraine-certainly not the bluster he invaded the country, the crazy idea of Russia attacking any NATO country will hopefully be dismissed as nonsensical fantasizing.

Russia and China-as I have written [2] previously- do not want war. But when provoked will do whatever is necessary to defend themselves. I believe a much needed detente will be forthcoming dispelling the neo-con inspired notion of winning a nuclear confrontation, something that could have been in the works if Hillary was elected.

To be sure Trump has made some outrageous statements about women, deporting illegal immigrants, building a wall, preventing Muslims from entering the US and much of the rest that had liberals and many progressives apoplectic and hyper ventilating over the coming of the "Donald".

Sure Trump will nominate a conservative to fill the Scalia vacancy on the Court. So amending the Constitution overturning "Citizens United" presumably won't happen. But that was a long shot to begin with.

Overturning "Roe" isn't going to happen despite the fear of leftists of a Trump nomination to SCOTUS. Legal abortion has been around for 43 years. Trump isn't a fundamentalist Christian so he's not going to nominate somebody that supports banning abortions and a women's right to choose. The same for a same-sex marriage ban. Such "threats" to the family was nonsense, anxiety induced fear that has no basis in fact.

Many-most- people in this country are hurting. Neo-liberal trade agreements, the outsourcing of jobs, austerity measures, demise of domestic manufacturing have taken a toll on the blue collar, formally working middle class in this country. These people-not just the racist bigots, KKK, Christian fundamentalists et al-elected Trump hoping for a change in their economic fortunes.

Again, let's see what actually happens on all the fronts indicated here as well as other issues not mentioned in this short piece.

Retired. The author of "DECEIT AND EXCESS IN AMERICA, HOW THE MONEYED INTERESTS HAVE STOLEN AMERICA AND HOW WE CAN GET IT BACK", Authorhouse, 2009
Related Topic(s): President Elect; Trump Presidency, Add Tags
Add to My Group(s)
Go To Commenting
The views expressed herein are the sole responsibility of the author and do not necessarily reflect those of this website or its editors.