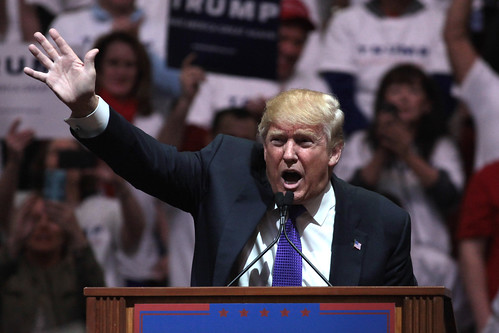 Donald Trump's demand for "monitors" at polling places to prevent a "rigged election" is an old and ugly story.

It's obviously aimed -- KKK style -- at stopping black and Hispanic citizens from voting. But in fact both major parties have used such terror tactics -- and updated electronic ones -- since the birth of the nation.

The cure -- we call it "the Ohio Plan" -- is scorned by both corporate parties: universal automatic voter registration, transparent registration rolls that can be easily monitored, a national holiday for voting, and universal hand-counted paper ballots that stay in one place and are tallied (and re-tallied) in full public view.

The "rigged election" story dates back to the Constitution. Its Electoral College gave a three-fifths "bonus" to slave-owners for blacks who could not actually vote. The race card carried through Jim Crow segregation and the KKK terror unleashed against post-Emancipation blacks who dared try to vote. It continues through the Drug War and the tens of millions of African-American and Hispanic citizens stripped of their freedom and franchise.

Today it's being done by computer programs that quietly eliminate millions of black and Hispanic voters from the registration rolls.

In moves that Trump should love, between the 2004 and 2008 elections, in a state with about 5.5 million eligible voters, 1.25 million Ohioans were de-registered. In 2012, the number purged was 1.1 million. So far this year, Republican secretary of state Jon Husted has de-registered over a million Ohio voters, more than 600,000 clearly eligible to vote and on the rolls of their county boards of elections.

Photo ID, limited polling station access, machines that break down, provisional ballots that don't get counted, absentee ballots that don't get sent, elimination of days to vote, deliberate official misinformation and intimidation -- all do exactly what Trump wants. They eliminate the "threat" of non-white voters.

In reporting on Trump's assertions, The New York Times quotes Ohio's GOP secretary of state Husted as the "voice of reason." But like other Republican secretaries of state across the U.S., Husted is aggressively stripping millions of black and Hispanic voters from the registration books. Nationwide, tens of millions of exactly the kinds of people Trump doesn't want to vote will have been stripped off the voter rolls come November. Much of this is explained in Greg Palast's new film, The Best Democracy Money Can Buy.

As Michelle Alexander has explained in her book The New Jim Crow, tens of millions of blacks and Hispanics have been stripped of their votes since Richard Nixon declared the War on Drugs in 1971. Alongside filling history's biggest gulag with about 2.2 million prisoners, America's Drug War has anchored the GOP's Southern Strategy by stripping blacks and Hispanics from the rolls in southern states where they comprise some 40% of the potential electorate.

Neither Trump nor his mainstream critics mention mass incarceration's "twin" means of election rigging: electronic voting machines. Some 80% of this year's votes may be cast on touchscreen and other computerized devices that are absurdly easy to flip. The courts say the corporate-owned source code is proprietary. So there's no meaningful accountability. Allegedly safe Scantron paper ballots are easily manipulated with corrupted tallying machines.

Significant computer manipulations helped rig GOP presidential victories in Florida 2000 and Ohio 2004, and critical down-ballot elections elsewhere. These include the 2014 U.S. Senate races in North Carolina, Colorado, and Alaska that now loom large in terms of who might or might not be confirming new Supreme Court appointments.

Corporate-sponsored critics brand this "conspiracy theory." But neither they nor Trump can answer this most basic question: "How, in fact, do we verify the legitimate tally of votes cast on electronic machines with no effective paper trail, i.e., the vast majority of those that will be cast this November?"

Related Topic(s): American Capitalism; American Presidents; Election Fraud; Election Law; Rigged Elections, Add Tags
Add to My Group(s)
Go To Commenting
The views expressed herein are the sole responsibility of the author and do not necessarily reflect those of this website or its editors.