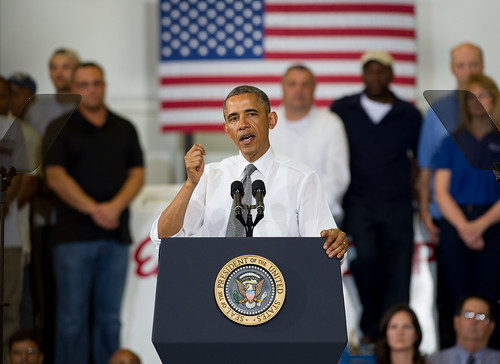 Barack Obama deported two million -- more than any other president. Thousands of kids lost their parents. Yet demonstrations were few. Anglo solidarity was nowhere to be found. Same action, different reaction. Why? As we've seen under Jimmy Carter and Bill Clinton, progressives go to sleep when Democrats are in the White House.

Trump will be deplorable. But as the unrest that followed his victory signals, he'll have a salutary effect on American politics: Liberals will resist the same fascist horrors for which they've been making excuses under Obama (and would have continued to tolerate under Hillary Clinton).

Ironically, their struggle will be made all the more challenging due to the fascist moves promulgated by Barack Obama, a president revered by liberals -- but whose administration has been characterized by a stream of fascist policies.

Edward Snowden revealed that the NSA and other government agencies are spying on all of our communications: phone calls, email, texts, video, even snail mail. But the fiercest reactions came from people outside the U.S. It was 2013 and Obama was president. For the most part liberals -- the political faction you'd expect to raise hell -- trusted their charming first black president not to abuse his powers.

Trump will inherit Obama's Orwellian surveillance apparatus. During the campaign, he said, "I wish I had that power."

When Obama took over from Bush in 2009, he issued a symbolic denunciation of the torture his predecessor had legitimized and institutionalized. In practice, however, nothing changed. Sending a clear message that he approved of their actions, Obama ordered his Justice Department not to prosecute anyone for waterboarding or other "enhanced interrogation techniques," saying infamously that it was time to "look forward, as opposed to looking backwards." He went to Langley to tell CIA agents he'd watch their backs. He refused to issue a presidential executive order banning torture by the CIA.

Trump will take over that bureaucratic infrastructure of torture, including the legal opinions issued by Bush's White House counsel that Obama failed to annul. During the campaign, Trump pledged to bring back waterboarding and "a hell of a lot worse," whatever that means.

Upon taking office Obama tepidly attempted to follow up on his campaign promise to close Guantanamo concentration camp. But he caved in the face of congressional opposition. Though Obama has managed to winnow down the number of inmates in America's Cuban gulag to double digits, his lackadaisical unwillingness to expend political capital on the issue has left the camp open. It has also legitimized the formerly unthinkable practice of holding prisoners indefinitely without charging them with a crime or putting them on trial.

Trump says he'll keep the camp open, expand it, and "load it up with some bad dudes," including American citizens whose politics he doesn't care for.

Part of the justification given for indefinite detention is the Bush-era Military Commissions Act of 2006, which eliminated the right of habeas corpus, the right to a speedy and fair trial enshrined in Anglo-American law for eight centuries. Under the MCA, the U.S. government can throw you into a concentration camp where you'll never see your family or a lawyer. As far as we know, Obama never availed himself of this power.

Do you trust Trump to exercise similar restraint? Thanks to Obama's failure to get rid of the MCA, Trump may make good on his promise to disappear U.S. citizens.

Obama has vastly expanded Bush's program of drone assassinations of political opponents to nasty American client states like Pakistan, Afghanistan, Yemen and Somalia. His Tuesday "kill list" star chamber has issued hits against thousands of people; 98% of the victims have been hapless bystanders.

Could President Trump deploy drones against American citizens (or non-citizens) on American soil? Yes, he could, says Obama's attorney general Eric Holder. Obama could have declared that he -- and future presidents -- did not have that power. Better still, he could have asked Congress to pass a law banning domestic drone killings. Instead, he went golfing.

Related Topic(s): Donald Trump Lies; Fascism; Left Versus Right; Obama Effect; Torture, Add Tags
Add to My Group(s)
Go To Commenting
The views expressed herein are the sole responsibility of the author and do not necessarily reflect those of this website or its editors.