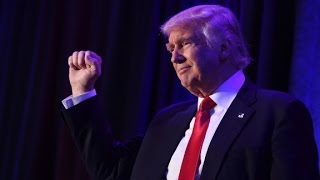 If nothing else, the 2016 elections have once again reaffirmed America's solid democratic system. Without any major incidents, tens of millions of Americans went to polling stations across the land, voted for the candidate of their choice, and readied themselves, as always, for the peaceful transfer of power. I believe that even those who were deeply disappointed with the results of the election will sooner than later rise above the fray, put the nation's interests first, and work to build a more wholesome union.

Notwithstanding the post-election trauma that many Americans are experiencing and the time the Trump administration will need to sort out a host of domestic and foreign policy issues, the US faces numerous foreign crises and it does not have the luxury of time to pause in dealing with them. America's leadership role and responsibility remain pivotal to mitigate, if not end, many of these violent conflicts sweeping the Middle East in particular. Although President-elect Trump is inexperienced and lacks the nuanced knowledge of the complex crises America is confronted with, he must now navigate his own way and develop new strategies, particularly in the areas where Obama fell short, including the Israeli-Palestinian conflict, the Sunni-Shiite war, and the civil war in Syria.

The Israeli-Palestinian conflict: There is no doubt that President Obama has made supreme efforts to solve the seven-decades old Israeli-Palestinian conflict. However admirable his efforts were, the president and his chief mediator Secretary of State John Kerry failed to take into account the psychological dimension of the conflict, which has been and remains the core impediment to resolving the conflict, especially from religious, historic, and ideological perspectives.

Throughout the two sets of intensive negotiations in 2009-2010 and 2013-2014, and in spite of the progress made on various conflicting issues such as the Palestinian refugees, the future of Jerusalem, and borders, the failure to mitigate the psychological aspect connected to these issues made it impossible for either side to deliver what they have agreed upon.

At this juncture, the gulf between the two sides has become even deeper and wider, and no amount of mediation, compensation, or coercion can persuade either side to make the significant concessions needed to make peace possible.

The Trump administration must first focus on a process of reconciliation (people-to-people activity) that would mitigate the profound mutual distrust, instill a sense of mutual security, and disabuse the strong constituencies on both sides that they can have it all.

During this process of reconciliation between the two sides, which should last for about two years, the US with the support of the EU (led by France) should promote the Arab Peace Initiative (API) to provide the overall framework for peace based on a two-state solution.

Although many Israelis celebrated the election of Trump, believing that he would not pressure Israel to accept a two-state solution, the Trump administration will make a mistake of historical proportions if it leaves Israelis and Palestinians to their own devices.

The current relative calm should not be taken for granted as the simmering tension can explode any time if the Palestinians see no prospect of ending the occupation in the foreseeable future.

Only by creating the social, political, and psychological atmosphere conducive to peace, and with the support of the Arab states, the EU, and other major powers, can the negotiations be resumed with a far better prospect of success. If Trump is concerned about Israel's future security and political integrity, he must not hesitate to pressure Israel now to seek a solution and save it from its own destructive path.

The Sunni-Shiite war: ISIS came to being in the wake of the Iraq war, which instigated a renewed violent conflict between the Sunnis and Shiites. Although the eventual defeat of ISIS is inevitable, it will not bring an end to the Sunni-Shiite conflict as long as Shiite Iran and Sunni Saudi Arabia are fighting for regional hegemony; they will continue to wage a proxy war in Iraq, Syria, and Yemen to secure their goal.

The key to settling this conflict is to revisit the Iraq war and its repercussions on the Sunnis in Iraq. After 81 years of their continuous rule, the Iraqi Sunnis now find themselves at the mercy of the Shiite governing majority, which has systematically discriminated against and marginalized them from the first day the Maliki-led Shiite government came to power.

The Trump administration must now understand that maintaining the unity of Iraq as a single country is no longer a viable option. Though the Sunni Iraqis loath ISIS, they despise and detest the Shiite government in Bagdad even more. To help bring a swifter end to the civil war in Iraq, the Sunnis need to be granted autonomy along the line of the Iraqi Kurds.

The US must now begin the dialogue between the Sunni and Shiite leadership in Iraq to reach an amicable agreement with which both can live. The three Sunni provinces that include the city of Mosul should constitute the contours of such an entity, but given the lack of natural resources (i.e., oil) in these areas, an equitable distribution of oil revenue should be established between them and the central government.

Related Topic(s): Bashar Al-assad; Foreign Affairs; Foreign Policy; Israel; Issues; Shiite; Sunni; Syria, Add Tags
Add to My Group(s)
Go To Commenting
The views expressed herein are the sole responsibility of the author and do not necessarily reflect those of this website or its editors.