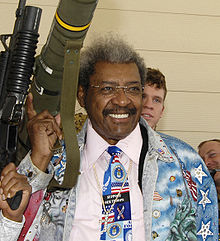 Today, on TV, the image is of Donald Trump cajoling with a flag-waving Don King, a man convicted of murder and guilty of numerous rip-offs of famous boxers like Ali and Foreman and Tyson.

What does it mean when a future President embraces a convicted murderer? What does it signify when the President-Select parades his support by a man guilty of numerous frauds?

I think that we cannot dismiss this as mere spectacle since Trump clearly enjoys (Kanya West) being supported by the same people he trashed ("You cannot walk down the street without getting shot.") even if 92% of African Americans reject him.

Why would Trump allow himself to be embraced by a convicted murderer? For the same reason he boasted that "My supporters would vote for me even if I shot someone on 5th Avenue in broad daylight." He knows that his propaganda techniques (venting and redirecting anger and hatred to defenseless populations, as Goebbels recommended as #18 of Principles of Propaganda) worked and that he had created a flock of blind sheep. If he could murder someone and not lose the loyalty of his followers, then surely having a mass media photo op with a convicted murderer and cheat posed no risk, while flipping the bird to those (the majority) who reject his corrupt ways.

King drops the n-word with Trump in attendance: audience erupts in laughter.

Don King, with a huge Trump sign hanging around his neck and waving a flurry of flags, US, Israeli, etc) appeared with Trump (who in truth looked troubled, casting his eyes down) at a TV appearance yesterday.

We all know the corruption of Trump, but I will here reprise the crimes of Don King.

Let's start with a speech he made in September in support of Trump, who was present.

Related Topic(s): Boxing; Fraud; Gambling; Guilty; Israel; Money; Murder; N-word; Trump Presidency, Add Tags
Add to My Group(s)
Go To Commenting
The views expressed herein are the sole responsibility of the author and do not necessarily reflect those of this website or its editors.