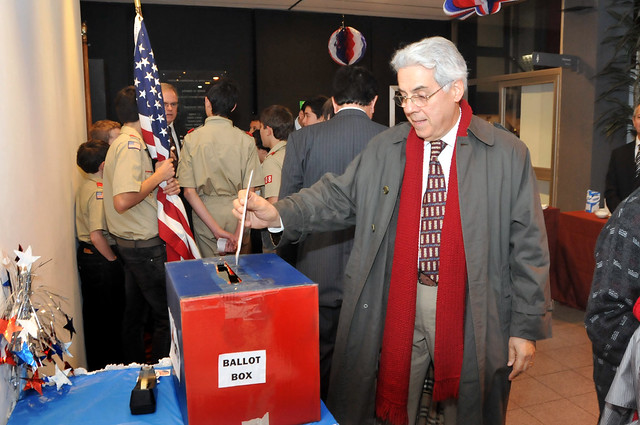 Copyrighted Image? DMCA
"You can expend a lot of time and energy patiently explaining the near impossibility of rigging a national election or getting a bunch of journalists to agree to follow any sort of plan." was written recently by an author seeking to refute the Trump claims of rigged elections. Let's check it out.

A study of the tv coverage of the run up to the Iraq War found that 97% of those called to comment were pro-war.
This is herd thinking.......it is not the exception but the rule. Journalists who do "not follow the plan" end up unpublished, even if they are world famous. Hersh's "Red Lines and Rat Lines", one of the most important articles in recent history, could not find a US publisher and had to be published in the UK. The result is that the US public is still under the illusion that CW in Syria were dropped on civilians by their own government. This Big LIe, designed to justify attacking Damascus (and thus killing even more civilians), was censored by the US media. When critical information is censored, that is a form of rigging public opinion and thus voting behavior.

"Hersh first gained recognition in 1969 for exposing the My Lai Massacre and its cover-up during the Vietnam War, for which he received the 1970 Pulitzer Prize for International Reporting. In 2004, he notably reported on the US military's mistreatment of detainees at Abu Ghraib prison. He has also won two National Magazine Awards and five George Polk Awards. In 2004, he received the George Orwell Award." Wiki

The 2006 winner of the world's most important public intellectual survey was Noam Chomsky; he is banned from the MSM, as are other alternative thinkers like Alperowitz and Wolfe. Journalists like Blumenthal and Greenwald are likewise basically censored by the corporate media........why? Because they refuse to be herded. Greg Palast, a world-respected investigative journalist, an American, cannot find an American publisher so he works for BBC. We have exiled our best minds, and this is a deep self-inflicted wound.

Our elections are rigged by the corruption of Big Money and the control of the process by corporate serving private institutions like the major parties. Voter suppression rigs elections in favor of Republicans. Dirty tricks (sending out voting notices with false dates, claiming your opponent has an illegitimate child, etc) also rig elections.

The polls were also biased in the 2012 election....for the Republicans! The RealClearPolitics average had Obama winning by 0.9. He won by 3.9%, showing a Republican bias in the polls.

If our elections were not rigged, we would be getting ready to welcome Bernie Sanders as President, since all the polls showed him beating both Trump and Clinton by a large margin. The System is set up to block mob rule. And so the 1% (or rather the .001%) rule, and we have oligarchy, which is founded on duopoly. Goldman-Sachs just endorsed Clinton, after giving her $675,000 for 3 speeches. She says she will not change her positions, but that is WHY they are bribing her: to make sure the Sanders and Warrens do not push her back to a Glass-Steagal solution. She is paid to stay the course for the banks. That is rigged.

In 2000, Bush won with fewer votes than Gore: the Constitution itself rigs elections, thru the Electoral College and the gross malrepresentation of how the Senate is elected. California has more population than 22 small, low-populations states. These 22 states have 44 Senators; it takes only 41 to block the majority (up to 60). California, with slightly more citizens, has two votes in the Senate; the 22 rural states have 44 votes, with fewer people.

Thus the Constitution betrays the values used to justify armed revolution: equality and consent of the governed.

90 California voters have less power and thus less consent than 1 Montana or Wyoming voter. This betrays equality AND consent. Consent requires that all votes be counted equally, not giving 98% more weight to some states than others.

And so by Constitution, by voter suppression laws, by dirty tricks, and by exclusion of 3d parties from debates, the elections are, and always have been rigged. In the first election, Washington won with 43,000 votes, the 1% of the population who were white rich males (Washington was among the very largest slave owners). 99% were not qualified to vote. When these 99% finally got the right to vote, the rigging began, to make sure that the 1% remained in control The only change, other than universal suffrage, has been that the 1% who rule are no longer slave owners but banks and transnational corporations. When Goldman gave Clinton $675,000 and then endorsed her, you can pretend there is no link. I mean: money doesn't talk, it swears!

Our elections have been rigged since the first election, but not in the ways that Trump is claiming. He is right, but for the wrong reasons. And he is inverting the truth which is rigging is usually a Republican obsession; since 2010, 20 Republican states have enacted voting restriction acts. And the polls? In 2012, they were biased for Republicans.

And voter fraud: it hardly exists. But the combination of Big Money, restrictive voting laws, and dirty tricks are a speciality of the Republican Party, tho the DNC rigged the primary for Clinton.

The solution is simple: eliminate Big Money, enact laws which encourage voting, and send dirty tricksters to the Big House. Other ways to unrig elections is to enact proportional representation since the current system ensures the rule of the duopoly/oligarchy and reduces our freedom of choice. When Trump loses November 8, he will blame rigged election, and Democrats will deny it. The truth, as too often, will be buried in the crossfire. The truth is that our elections are designed to keep the 1% in power, regardless of party. The rigging is Constitutional, institutional, and legal (and illegal).

The US elections rank at the bottom for developed nations. This clicks with a nation which pretends to be a democracy but in fact is an oligarchy. Part of creating a democratic society is the need to clean up our elections so they serve the people and not the oligarchs.

In conclusion, I want to say: the last thing to do with rigged elections is to not vote. Voting must be used to counteract the rigging, as Obama did in 2012 when he had to get nearly 5 million more than Romney to pull it off. The cure for election fraud is more voting. Choosing not to vote only amplifies the rigging.