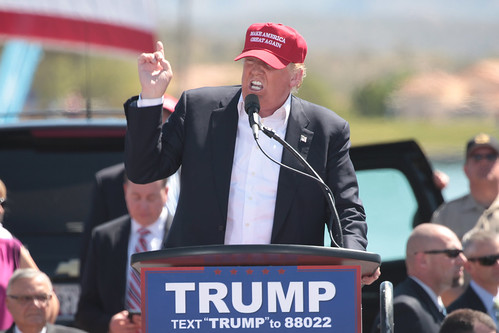 Duluth, Minnesota (OpEdNews) October 24, 2016: Whatever else may be said about Hillary Rodham Clinton (born in 1947), the Democratic Party's 2016 presidential candidate, she is not a charismatic speaker. But to be sure, she is an effective debater. She is a pragmatist, not a utopian. Because she has long been in the public eye, American voters who vote for her to be the next president of the United States are probably under few illusions about her.

By contrast, her Republican opponent, Donald J. Trump (born in 1946) summons his white supporters to "Make America Great Again" -- as it was great when it emerged victorious in World War I and then again in World War II. For Trump and his supporters, the once great America they invoke represents a golden age in America's past -- a kind of utopian paradise lost.

Ironically, Trump's crude bragging to Access Hollywood's Billy Bush, a member of the Bush family that includes two former U.S. presidents, in mid-September 2005 about his behavior toward women may have helped advance the spirit of political correctness today more than any feminist single-handedly could have. Indeed, in the second televised presidential debate, even Trump said that he was not proud of his recorded comments.

When the moderator Anderson Cooper asked Trump directly if he had indeed acted in the ways that he had boasted to have acted, Trump said that he had not. But his explicit denial then prompted nearly a dozen different women to come forward and describe his sexual assaults toward them.

Typically, Trump has accused his women accusers of lying. He also said that he would bring lawsuits against them for defamation of character. Of course his threat of lawsuits garnered him still more free media coverage.

In his presidential campaign, Trump's most consistent strategy has been to say things that will receive free media coverage.

In the court of public opinion, Trump's accusers will probably prevail.

Should Trump emerge victorious, which is still not unthinkable, all bets are off as to what he might do, because he is so totally unpredictable.

Should Hillary emerge victorious, the Republicans in Congress will undoubtedly continue their obstructionist tactics. As a result, she is not likely to sign any big new laws.

But should Hillary emerge victorious, Trump's white supporters will unleash a torrent of attacks on her, similar in spirit to the torrent of attacks unleashed on President Barack Obama. See Bill Press' book The Obama Hate Machine: The Lies, Distortions, and Personal Attacks on the President -- and Who is Behind Them (2012). As a result, our culture wars will continue, not subside, because white rage-aholics are virtually incapable of overcoming their addiction to expressing rage.

Related Topic(s): Culture; Debate; Democratic; Donald Trump Supporters; Insults; Rage; Republican; Shame; Spirit; Trump Campaign; (more...) Women; Women Voters, Add Tags  (less...)
Add to My Group(s)
Go To Commenting
The views expressed herein are the sole responsibility of the author and do not necessarily reflect those of this website or its editors.