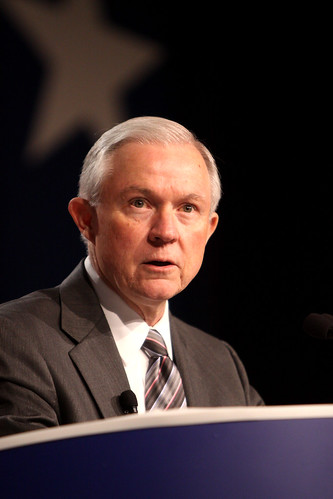 In his successful run to the presidency, Donald Trump spent a lot of time talking about the Second Amendment and defending gun ownership. He spent very little time talking about the other amendments, other than to say he supported the Constitution. He knew his core support came from those who could effortlessly repeat a phrase, "Donald Trump supports my Second Amendment rights," without knowing much more than that.

There's probably a reason why Trump wasn't specific about the other rights--he doesn't know much about the Constitution. That became apparent this past week when he said he would jail anyone who burned the flag. However, the Supreme Court, in Texas v. Johnson (1989), ruled that burning the flag is protected by the First Amendment right of free speech, no matter how hateful or unpatriotic it may seem. Trump's tweet was soundly condemned by all media and civil rights organizations.

Trump's knowledge of the Constitution isn't as important as his attorney general's enforcement of Trump's political beliefs. Most attorney generals have been apolitical; Trump's nomination may not be.

Sen. Jeff Sessions (R-Alabama) will face significant questioning by most Democrats and a few Republican senators during confirmation hearings. Ronald Reagan withdrew his support for Sessions in 1986 after nominating him for a federal judgeship. The nomination had drawn heated opposition by numerous groups , individuals, and four Department of Justice lawyers over Sessions' history of racially insensitive comments. Among comments that Sessions made was that the NAACP, the Southern Christian Leadership Conference, the ACLU, and the National Conference of Churches were un-American.

Sessions says he isn't a racist. Perhaps that's accurate, but let's see what he said in 2014. In an uninformed opinion about the recruitment of not-naturalized immigrants into the military, Sessions stated, "I just think in terms of who's going to be most likely to be a spy: somebody from Cullman, Alabama, or somebody from Kenya?" Elaborating, he stated, "We don't have a difficulty getting American citizens to fill our military slots. That is unbelievable that in a time of high unemployment and we get a lot of calls -- 'Help my son get in the military. He's been turned down, can he get in?' So I just think this is not the right thing to do right now." However, an investigation conducted by the Kansas City Star revealed the problem wasn't that the military was turning down American citizens but that the reduction of ground troops led to increased requirements for recruits and about 80 percent of American citizens who applied were rejected as unfit for service.

"Unfit" also applied to the Klan, which Session says "was OK until I found out they smoked pot." He claims he was joking. But he wasn't joking about his opinion of marijuana. In 2016, he incorrectly stated, "Good people don't smoke marijuana." Again elaborating on his main theme, the four-term senator said, "We need grown-ups in charge in Washington to say marijuana is not the kind of thing that ought to be legalized, it ought not to be minimized, that it's in fact a very real danger." He opposes sentence reduction and believes in seizing the assets of those arrested for possession, even before those arrested are convicted, a distinct civil rights violation to the Constitutional guarantee that persons arrested are considered to be innocent until proven guilty in a court of law.

He opposes same-sex marriage, voted against repealing the military's "Don't Ask, Don't Tell" policy, and believes that the U.S. should be allowed to torture suspected terrorists.

Sessions was an early supporter of Trump's proposal to ban immigration of Muslims to the United States. He stated there was no vetting process for Syrian refugees, a claim that wilts in face of the reality that it takes 18 to 24 months of intensive investigation before immigrants are admitted to the U.S.

Sessions also argued against the H-1B provision of the Immigration Act that allows persons who possess significant skills are allowed admission to the U.S. if there are not a sufficient number of Americans to fill those jobs. The H-1B provision has often been used to allow physicians and medical workers into the U.S. In the Senate's Judicial Committee, Sessions delivered a 30 minute speech about why there needed to be a ban. "Many people are radicalized after they enter," Sessions stated, again inaccurately, and then claimed, "How do we screen for that possibility, if we cannot even ask about an applicant's views on religion? Would we forbid questions about politics? Or theology?" However, the Constitution and Supreme Court interpretations of the Constitution are specific in stating that there can be no religious test for immigrants--before or after admission to the U.S.

An attorney general has wide latitude on whom he or she prosecutes or doesn't prosecute, or what terms are acceptable on plea bargains. With Jeff Sessions as attorney general, there is every probability that there will be an overhaul of career staff who are apolitical, of the prosecution of certain crimes at the expense of other crimes, and the refusal to pursue many civil rights violations.

[Dr. Brasch is an award-winning social issues/investigative journalist who has covered government and politics for four decades. His latest book is Fracking America: Sacrificing Health and the Environment for Short-Term Economic Benefit.]

Related Topic(s): Dept Of Justice DoJ; Dept Of Justice DoJ Crimes; Donald Trump; Jeff Sessions; People Trump Donald; Presidency, Add Tags
Add to My Group(s)
Go To Commenting
The views expressed herein are the sole responsibility of the author and do not necessarily reflect those of this website or its editors.