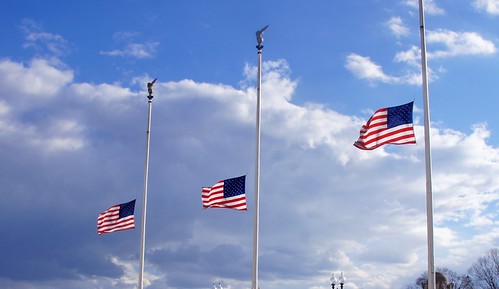 2. Rigging the DNC primary to deny Bernie Sanders a nomination. This could have been fixed by Sanders running as an independent. It can now be fixed by all DNC donors abandoning it and putting their funds into activism. Of course the DNC should dump Brazile and all Clintonites, but installing Howard Dean or Keith Ellison hardly solves anything. Disempowering parties through some of the proposals below would work.

4. Voter suppression that Greg Palast says stripped 1.1 million voters from the rolls in swing states, but which Democrats seem not to give a damn about -- perhaps because Putin didn't do it. This can be fixed by creating a right to vote, making voter registration automatic, debunking the myth of "voter fraud," undoing the anti-voter restrictions of recent years, providing adequate polling stations, and making election day a holiday.

5. Unverifiable election machines, including optical scanners, that have left us in an awkward situation. Exit polls, which the U.S. Department of State uses to judge the credibility of elections in other countries, show that Clinton won in North Carolina, Pennsylvania, Florida, Minnesota, Michigan, and Wisconsin. But we are supposed to just take it on blind faith that in fact she didn't. This can be fixed by publicly hand counting paper ballots in every polling place. Of course the acceptable position is to believe on faith that the vote counts are accurate, but since when is taking it on faith the progressive position, when taking it on empirical evidence is a perfectly possible alternative?

6. The winner-take-all system in most states, which concentrates the election on a handful of states and leads to the winner of the popular vote losing the election. This can be fixed by states choosing to distribute their electoral college "votes" in proportion to their actual human votes.

David Swanson is the co-founder of AfterDowningStreet.org and the author of the book "Daybreak: Undoing the Imperial Presidency and Forming a More Perfect Union" by Seven Stories Press. You can order it and find out when tour will be in your town: (more...)
Related Topic(s): Election Free Media Advertising; Election Integrity; Election Integrity; Election Protection; Election Reform Activism; Fraud; Redistricting, Add Tags
Add to My Group(s)
Go To Commenting
The views expressed herein are the sole responsibility of the author and do not necessarily reflect those of this website or its editors.