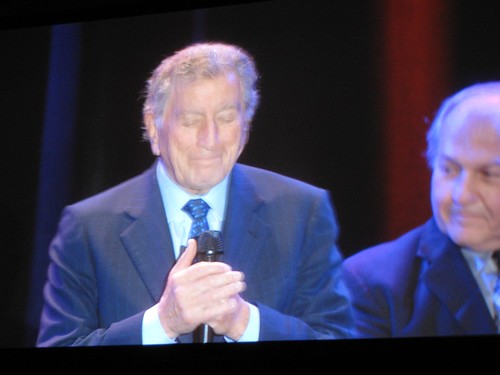 Tony Bennett owner Glenn Fleishman
(Image by GlennFleishman)   Details   DMCA
On December 20, 2016, during a wonderful NBC Tribute Special celebrating Tony Bennett's 90th birthday, TV viewers were treated to awesome extravaganza that had Tony's peers singing and expressing love for him. This author tuned in midway just as Wynton Marsalis while introducing Stevie Wonder was offering, a moving remembrance of what Tony had done for civil rights back in th'60s, including singing for the marchers in Alabama along the route. Stevie Wonder was astoundingly wonderful, first intoning in his indescribably charming way of singing I Just Called To Say I Love You and then going into a dynamic driving jazz up tempo with breath takingly tight orchestra backed unison rhythms. I was told Andrea Bocelli, k.d. lang, and Bennett's duet partner and great pal, Lady Gaga had sang earlier. After Stevie Wonder Lady Gaga come on again, and sang La Vie en Rose more beautifully than this writer had ever heard that melody or Lady Gaga ever sing before. Tony Bennett himself was the great finale to the show. He was at his best swinging The Best is Yet to Come and Who Can Ask for Anything More, I Left My Heart in San Francisco, and trilled this listener as he finished, throwing his mike aside and singing unamplifed Fly Me to the Moon, loud and clear and high.

Tony Bennett, is a W.W.II veteran and pacifist, and speaking about 9/11 and American militarism on the Howard Stern Show back in 2011, commented, "But who are the terrorists? Are we the terrorists or are they the terrorists? Two wrongs don't make a right. They flew the plane in, but we caused it....Because we were bombing them and they told us to stop." A few days later, on HBO's Real Time with Bill Maher speaking of Tony Bennett 'getting into trouble', guest Michael Moore approved, "I think it's a brave thing to say. If you have a pit bull in your neighbor's back yard, and you go over there and keep kicking that pit bull, and then the pit bull bites you, you don't say, Hey, I don't know why that pit bull bit me!' It's 'cause you've been kicking the dog!"A beloved then 85 year old jazz singer had scratched the surface of the psyop control of most American minds by war investor-owned-and-managed media since World War One.

(In 1950, Einstein explained why our civilization continues to be "like an axe in the had of the pathological criminal,": "Under existing conditions, private capitalists inevitably control, directly or indirectly, the main sources of information (press, radio, education). It is thus extremely difficult, and indeed in most cases quite impossible, for the individual citizen to come to objective conclusions and to make intelligent use of his political rights." - Albert Einstein, Essays in Humanism)

Tony later apologized for upsetting listeners, but didn't retract his words, because he is an honest caring person and perhaps therefore such an extraordinary musician. Other things he said to Howard Stern were, "War is the lowest form of human behavior. Weapons should be banished from the planet and those that make weapons should be arrested. Life is a gift, to be enjoyed."

This article has been written by an archival research peoples historian working with former US Attorney General Ramsey Clark, to help seed in the public consciousness worldwide a demand for the prosecution, under the Nuremberg Principles of International Law and the Convention on Genocide, of the illegal, unconstitutional and genocidal use of the US Government, US Armed Forces, CIA, sanctions and media using public owned air waves, to bomb, invade, and occupy fellow member nations of the United Nations, an eventual prosecution that will end its profitability, and thus end such crime and bring justice to tens of millions of victims.

Related Topic(s): Responsibility; Role Model, Add Tags
Add to My Group(s)
Go To Commenting
The views expressed herein are the sole responsibility of the author and do not necessarily reflect those of this website or its editors.