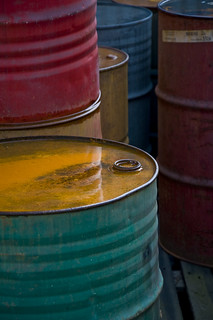 This article originally appeared at TomDispatch.com. To receive TomDispatch in your inbox three times a week, click here."href="http:>

On July 14, 2011, at TomDispatch, Bill McKibben wrote that he and a few other "veteran environmentalists" had issued a call for activists to descend on the White House and "risk arrest to demand something simple and concrete from President Obama: that he refuse to grant a license for Keystone XL, a new pipeline from Alberta to the Gulf of Mexico that would vastly increase the flow of tar sands oil through the U.S., ensuring that the exploitation of Alberta's tar sands will only increase." It must have seemed like a long shot at the time, but McKibben urged the prospective demonstrators on, pointing out that "Alberta's tar sands are the continent's biggest carbon bomb," especially "dirty" to produce and burn in terms of the release of carbon dioxide and so the heating of the planet.

Just over four years later, the president, whose administration recently green-lighted Shell to do test-drilling in the dangerous waters of the American Arctic, opened the South Atlantic to new energy exploration and drilling earlier this year, and oversaw the expansion of the fracking fields of the American West, has yet to make, or at least announce, a final decision on that pipeline. Can anyone doubt that, if there had been no demonstrations against it, if it hadn't become a major issue for his "environmental base," the Keystone XL would have been approved without a second thought years ago? Now, it may be too late for a variety of reasons.

The company that plans to build the pipeline, TransCanada Corporation, already fears the worst -- a presidential rejection that indeed may soon be in the cards. After all, we've finally hit the "legacy" part of the Obama era. In the case of war, the president oversaw the escalation of the conflict in Afghanistan soon after taking office, sent in the bombers and drones, and a year ago plunged the country back into its third war in Iraq and first in Syria. Only late in his second term has he finally overseen an initiative worthy of a less warlike legacy: the embattled Iran nuclear deal. Similarly, the man who headed an "all of the above" administration on energy policy in an era in which the U.S. became "Saudi America" has only now launched a legacy-shaping climate change initiative that could matter, aimed at cutting back carbon dioxide emissions from coal-powered plants. So maybe in this legacy era, the Keystone XL will be next to fall. Or maybe Obama will let his final year and a half play out without a decision on whether or not to build it and turn the issue over to Hillary Clinton, who refuses to commit on the matter, or one of 17 Republicans, all of whom would build a pipeline to anywhere carrying anything rather than enact a single climate change initiative, no matter how mild.

Another factor has, however, entered the picture. As Michael Klare, TomDispatch's resident energy expert and the author of The Race for What's Left, explains, the dynamics of the energy industry may be changing in a way that could sink Canada's vast tar sands enterprise in a sea of red ink. If so, the tar sands industry, already hit hard by the plunge in oil prices last year, may face an even more rugged future.

"If you build it, he will come" is the classic tag line from the movie Field of Dreams. For the Keystone XL pipeline, however, that might someday have to be rewritten as: "If you build it, it won't come." Even if built, it might prove to be a pipeline to nowhere. Let Klare explain why. Tom

Double-Dip Oil Rout
Why an Oil Glut May Lead to a New World of Energy
By Michael T. Klare

The plunge of global oil prices began in June 2014, when benchmark Brent crude was selling at $114 per barrel. It hit bottom at $46 this January, a near-collapse widely viewed as a major but temporary calamity for the energy industry. Such low prices were expected to force many high-cost operators, especially American shale oil producers, out of the market, while stoking fresh demand and so pushing those numbers back up again. When Brent rose to $66 per barrel this May, many oil industry executives breathed a sigh of relief. The worst was over. The price had "reached a bottom" and it "doesn't look like it is going back," a senior Saudi official observed at the time.

Skip ahead three months and that springtime of optimism has evaporated. Major producers continue to pump out record levels of crude and world demand remains essentially flat. The result: a global oil glut that is again driving prices toward the energy subbasement. In the first week of August, Brent fell to $49, and West Texas Intermediate, the benchmark for U.S. crude, sank to $45. On top of last winter's rout, this second round of price declines has played havoc with the profits of the major oil companies, put tens of thousands of people out of work, and obliterated billions of dollars of investments in future projects. While most oil-company executives continue to insist that a turnaround is sure to occur in the near future, some analysts are beginning to wonder if what's underway doesn't actually signal a fundamental transformation of the industry.

Recently, as if to underscore the magnitude of the current rout, ExxonMobil and Chevron, the top two U.S. oil producers, announced their worst quarterly returns in many years. Exxon, America's largest oil company and normally one of its most profitable, reported a 52% drop in earnings for the second quarter of 2015. Chevron suffered an even deeper plunge, with net income falling 90% from the second quarter of 2014. In response, both companies have cut spending on exploration and production ("upstream" operations, in oil industry lingo). Chevron also announced plans to eliminate 1,500 jobs.

Painful as the short-term consequences of the current price rout may be, the long-term ones are likely to prove far more significant. To conserve funds and ensure continuing profitability, the major companies are cancelling or postponing investments in new production ventures, especially complex, costly projects like the exploitation of Canadian tar sands and deep-offshore fields that only turn a profit when oil is selling at $80 to $100 or more per barrel.

According to Wood Mackenzie, an oil-industry consultancy, the top firms have already shelved $200 billion worth of spending on new projects, including 46 major oil and natural gas ventures containing an estimated 20 billion barrels of oil or its equivalent. Most of these are in Canada's Athabasca tar sands (also called oil sands) or in deep waters off the west coast of Africa. Royal Dutch Shell has postponed its Bonga South West project, a proposed $12 billion development in the Atlantic Ocean off the coast of Nigeria, while the French company Total has delayed a final investment decision on Zinia 2, a field it had planned to exploit off the coast of Angola. "The upstream industry is winding back its investment in big pre-final investment decision developments as fast as it can," Wood Mackenzie reported in July.

As the price of oil continues on its downward course, the cancellation or postponement of such mega-projects has been sending powerful shock waves through the energy industry, and also ancillary industries, communities, and countries that depend on oil extraction for the bulk of their revenues. Consider it a straw in the wind that, in February, Halliburton, a major oil-services provider, announced layoffs of 7% of its work force, or about 6,000 people. Other firms have announced equivalent reductions.

Such layoffs are, of course, impacting whole communities. For instance, Fort McMurray in Alberta, Canada, the epicenter of the tar sands industry and not so long ago a boom town, has seen its unemployment rate double over the past year and public spending slashed. Families that once enjoyed six-digit annual incomes are now turning to community food banks for essential supplies. "In a very short time our world has changed, and changed dramatically," observes Rich Kruger, chief executive of Imperial Oil, an Exxon subsidiary and major investor in Alberta's tar sands.

A similar effect can be seen on a far larger scale when it comes to oil-centric countries like Russia, Nigeria, and Venezuela. All three are highly dependent on oil exports for government operations. Russia's government relies on its oil and gas industry for 50% of its budget revenues, Nigeria for 75%, and Venezuela for 45%. All three have experienced sharp drops in oil income. The resulting diminished government spending has meant economic hardship, especially for the poor and marginalized, and prompted increased civil unrest. In Russia, President Vladimir Putin has clearly sought to deflect attention from the social impact of reduced oil revenue by whipping up patriotic fervor about the country's military involvement in Ukraine. Russia's actions have, however, provoked Western economic sanctions, only adding to its economic and social woes.

No Relief in Sight

Related Topic(s): Consumer Affairs Oil Prices; Corporations Oil; Oil; Oil, Add Tags
Add to My Group(s)
Go To Commenting
The views expressed herein are the sole responsibility of the author and do not necessarily reflect those of this website or its editors.