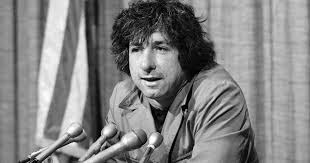 As an old SDS-er, I found it hard to see Tom Hayden go. However meandering his path, he was at the heart of radical history in the 60s, an erstwhile companion, if not always a comrade, on the route of every boomer lefty.

One of his finer moments for me, which I've never seen mentioned (including among this week's encomia) since he wrote it, was his 2006 article, published on CounterPunch with an introduction by Alexander Cockburn, in which he apologized for a "descent into moral ambiguity and realpolitick that still haunts me today." It would be respectful of Hayden's admirers and critics, on the occasion of his passing, to remember which of his actions "haunted" him the most.

The title of the article says it clearly: "I Was Israel's Dupe." In the essay, Hayden apologizes for his support of the Israeli invasion of Lebanon in 1982, which was for him that "descent into moral ambiguity" More importantly, he explains why he did it, in a detailed narrative that everyone should read.

Hayden sold out, as he tells it, because, in order to run as a Democratic candidate for the California State Assembly, he had to get the approval of the influential Democratic congressman Howard Berman. Berman is a guy who, when he became Chairman of the House Foreign Affairs Committee, was proud to tell the Forward that he took the job because of his "interest in the Jewish state" and that: "Even before I was a Democrat, I was a Zionist."

Related Topic(s): Israel Lobby; Tom Hayden, Add Tags
Add to My Group(s)
Go To Commenting
The views expressed herein are the sole responsibility of the author and do not necessarily reflect those of this website or its editors.