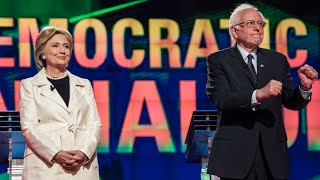 It was in April he called Clinton "unqualified" to be president. What changed that now makes her qualified two months later and he endorses her? Nothing I can see.

Was Bernie simply a stooge, a foil to draw young people into the electoral process?

He did the latter pointing out he voted against NAFTA, opposes ratification of the TPP (Transpacific Partnership), endorsed free college tuition, forgiveness of college student loan debt, a Medicare type health care system for all, pushed for the $15 dollar minimum wage, spoke of raising taxes on the rich to get them to pay their fair share, pushed a $trillion dollar infrastructure proposal that would add million of jobs, says the banks too big to fail need to be broken up, supports overturning "Citizens United" to get big money out of politics-among many of his good proposals.

Now he's endorsing Hillary who has garnered hundreds of thousands in speaking fees from the likes of Goldman Sachs, received countless millions through the Clinton Super PAC as well as other big corporate donors to her presidential campaign, was a huge supporter of NAFTA which got passed during husband "slick Willey's" time in the oval office-which has caused millions of jobs to leave the country- and until recently, supported the TPP, a trade scheme where corporations can sue governments if the corps can show they lost money because of government regulations and all heard before a corporate court.

Is this not a betrayal of Bernie's supporters? You bet it is.

It's just hard to imagine 85% of Dems who supported Sanders now opting to vote for Clinton in November. Bernie vehemently denounced Hillary as a captive of big moneyed interests while he received only small money donations throughout the primary campaign refusing to take big corporate donations as an obvious corrupting influence.

Clinton has no such reservations. and now Bernie has no reservations endorsing her nomination. I guess it was all campaign rhetoric and now it's time to kiss and make up.

Please. This is a sellout of the first order. Bernie betrayed his supporters trust. End of story.

Retired. The author of "DECEIT AND EXCESS IN AMERICA, HOW THE MONEYED INTERESTS HAVE STOLEN AMERICA AND HOW WE CAN GET IT BACK", Authorhouse, 2009
Related Topic(s): Bernie Sanders 2016 Presidential Candidate; Betrayal; People, Add Tags
Add to My Group(s)
Go To Commenting
The views expressed herein are the sole responsibility of the author and do not necessarily reflect those of this website or its editors.