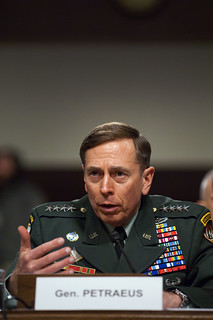 Former CIA Director David Petraeus just got sentenced to two years of probation for leaking highly sensitive information to his mistress and then lying to the FBI about it.

As happens with big-wigs, Petraeus' lawyer cited the 34 letters of support from other big-wigs sent on his behalf. Petraeus admitted his crimes and apologized to those he hurt.

The only "surprise" of the hearing is that, rather than getting slapped with a $40,000 fine, Judge David Keesler more than doubled the fine to send a message.

According to SpeakerPedia, Petraeus makes upwards of $132,750 for each speech.

In other words, this fine, meant to be especially harsh so as to send a message about the gravity of Petraeus' crimes, is about 75% of one speaker's fee for Petraeus.

Investigative journalist Marcy Wheeler writes the "Right to Know" column for ExposeFacts. She is best known for providing in-depth analysis of legal documents related to "war on terrorism" programs and civil liberties. Wheeler blogs at emptywheel.net and publishes at outlets including the Guardian, Salon and theProgressive. She is the author of more...)
Related Topic(s): David Petraeus; General Petraeus; Injustice; Sentencing Sentences, Add Tags
Add to My Group(s)
Go To Commenting
The views expressed herein are the sole responsibility of the author and do not necessarily reflect those of this website or its editors.

David Petraeus Gets Hand-Slap for Leaking, Two Point Enhancement for Obstruction of Justice

The Sterling Closing Arguments: Who Is the Hero, Who Is the Storyteller?

Official Leaks: "These Senior People Do Whatever They Want"