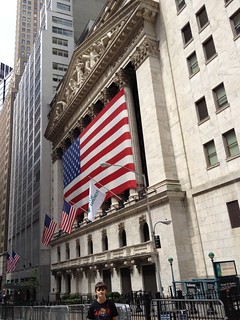 WALL STREET is still out of control. Seven years ago, the Federal Reserve and the Treasury Department bailed out the largest financial institutions in this country because they were considered too big to fail. But almost every one is bigger today than it was before the bailout. If any were to fail again, taxpayers could be on the hook for another bailout, perhaps a larger one this time.

To rein in Wall Street, we should begin by reforming the Federal Reserve, which oversees financial institutions and which uses monetary policy to maintain price stability and full employment. Unfortunately, an institution that was created to serve all Americans has been hijacked by the very bankers it regulates.

The recent decision by the Fed to raise interest rates is the latest example of the rigged economic system. Big bankers and their supporters in Congress have been telling us for years that runaway inflation is just around the corner. They have been dead wrong each time. Raising interest rates now is a disaster for small business owners who need loans to hire more workers and Americans who need more jobs and higher wages. As a rule, the Fed should not raise interest rates until unemployment is lower than 4 percent. Raising rates must be done only as a last resort -- not to fight phantom inflation.

What went wrong at the Fed? The chief executives of some of the largest banks in America are allowed to serve on its boards. During the Wall Street crisis of 2007, Jamie Dimon, the chief executive and chairman of JPMorgan Chase, served on the New York Fed's board of directors while his bank received more than $390 billion in financial assistance from the Fed. Next year, four of the 12 presidents at the regional Federal Reserve Banks will be former executives from one firm: Goldman Sachs.

These are clear conflicts of interest, the kind that would not be allowed at other agencies. We would not tolerate the head of Exxon Mobil running the Environmental Protection Agency. We don't allow the Federal Communications Commission to be dominated by Verizon executives. And we should not allow big bank executives to serve on the boards of the main agency in charge of regulating financial institutions.

If I were elected president, the foxes would no longer guard the henhouse. To ensure the safety and soundness of our banking system, we need to fundamentally restructure the Fed's governance system to eliminate conflicts of interest. Board members should be nominated by the president and chosen by the Senate. Banking industry executives must no longer be allowed to serve on the Fed's boards and to handpick its members and staff. Board positions should instead include representatives from all walks of life -- including labor, consumers, homeowners, urban residents, farmers and small businesses.

The Fed must also make sure that financial institutions are investing in the productive economy by providing affordable loans to small businesses and consumers that create good jobs. How? First, we should prohibit commercial banks from gambling with the bank deposits of the American people. Second, the Fed must stop providing incentives for banks to keep money out of the economy. Since 2008, the Fed has been paying financial institutions interest on excess reserves parked at the central bank -- reserves that have grown to an unprecedented $2.4 trillion. That is insane. Instead of paying banks interest on these reserves, the Fed should charge them a fee that would be used to provide direct loans to small businesses.

Third, as a condition of receiving financial assistance from the Fed, large banks must commit to increasing lending to creditworthy small businesses and consumers, reducing credit card interest rates and fees, and providing help to underwater and struggling homeowners.

We also need transparency. Too much of the Fed's business is conducted in secret, known only to the bankers on its various boards and committees. Full and unredacted transcripts of the Federal Open Market Committee must be released to the public within six months, not five years, which is the custom now. If we had made this reform in 2004, the American people would have learned about the housing bubble well in advance of the financial crisis.

In 2010, I inserted an amendment in Dodd-Frank to audit the emergency lending by the Fed during the financial crisis. We need to go further and require the Government Accountability Office to conduct a full and independent audit of the Fed each and every year.

Financial reforms must not stop with the central bank. We must reinstate Glass-Steagall and break up the too-big-to-fail financial institutions that threaten our economy. But we need to start with fundamental change. The sad reality is that the Federal Reserve doesn't regulate Wall Street; Wall Street regulates the Fed. It's time to make banking work for the productive economy and for all Americans, not just a handful of wealthy speculators. And it begins by making the Federal Reserve a more democratic institution, one that is responsive to the needs of ordinary Americans rather than the billionaires on Wall Street.

Related Topic(s): Bankers; Economy; Glass-Steagall; Reform; Wall Street Greed, Add Tags
Add to My Group(s)
Go To Commenting
The views expressed herein are the sole responsibility of the author and do not necessarily reflect those of this website or its editors.