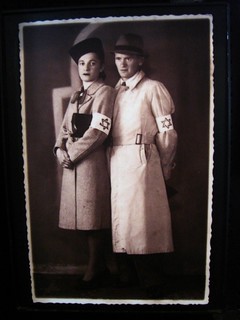 My parents didn't believe in God but it was important to them that my sister and I understand that we are Jewish. They wouldn't have put it that way themselves--they were proud to be members of an extended family that included so many great leftists and thinkers--but I think they regarded Jewishness as a congenital condition that made you smarter and more morally developed, but that also debarred you from the mainstream community and potentially shortened your life, as something like a mirror version of Downs Syndrome. They sent us to religious school, not so that we would learn how to live, but so that we would understand why we might die.

It wasn't altogether crazy. I was born in 1957, a mere dozen years after the biggest blood letting that history had ever seen. The six million Jewish dead were a small minority of the total fatalities--between Hitler and Stalin, some 14 million civilians were deliberately liquidated between 1933 and 1945, and the body count from the war amounted to another 60-70 million soldiers and civilians--but the Jews had been exterminated by plan and in the case of Europe's emancipated middle class Jews, by industrial means. They were registered, labeled, and rounded up for slaughter, men, women, and children alike, just like so many cattle.

Whether we American survivors of the tribe were a "saving remnant" or just a remnant, we had eluded the fate of so many of our aunts and uncles and cousins abroad because our grandparents had found their ways here. The US Constitution accords its religious minorities the same status as it does its religious majority, which is to say none, except the right to meet and pray unmolested (and un-taxed). George Washington put it best, in his letter to the Touro Congregation in Newport, Rhode Island:

It is now no more that toleration is spoken of as if it were the indulgence of one class of people that another enjoyed the exercise of their inherent natural rights, for, happily, the Government of the United States, which gives to bigotry no sanction, to persecution no assistance, requires only that they who live under its protection should demean themselves as good citizens in giving it on all occasions their effectual support.....May the children of the stock of Abraham who dwell in this land continue to merit and enjoy the good will of the other inhabitants--while every one shall sit in safety under his own vine and fig tree and there shall be none to make him afraid.

So what did we learn in religious school? That George Washington was naive. America was good, but who knew for how long? There was Lindbergh; there was John E. Rankin; there was George Lincoln Rockwell. Israel, our teachers told us, was a place where the Jews owned all the fig trees and controlled the army to boot--that was where real safety lay.

The Internet is on fire today, as it should be, with outraged denunciations of Donald Trump's call for a database of Muslims; I signed a petition that every other American Jew should sign as well. But what's terrifying to me is that Trump wouldn't be saying those things if he didn't think they'd win him support. He's not the only one: Ben Carson implicitly compared Syrian refugees to "rabid dogs"; Cruz and Bush both called for a religious test for refugees--and Cruz, echoing a classic anti-Semitic canard about the Talmud, noted that "there is a religious philosophy in Islamism that encourages them to lie to carry out jihad." How can so many Americans know so little about our own history and laws when it comes to religious pluralism?

And yet as I think about the lessons I learned in that suburban Reform synagogue almost fifty years ago, I find myself wondering how it could be otherwise, when so many Zionist Jews--the greatest beneficiaries of those laws and those traditions--appreciate them so little themselves. People are tribal. Product of the Enlightenment that it is, the American experiment runs against the grain of human nature in many ways. Demagogues know that and exploit it, and they always will. Some day one of them might be elected president.

Arthur Goldwag's books include ISMS & OLOGIES; CULTS, CONSPIRACIES AND SECRET SOCIETIES; and THE NEW HATE: A HISTORY OF FEAR AND LOATHING ON THE POPULIST RIGHT.
Related Topic(s): Anti-semitic; Ben Carson; Bigotry; Donald Trump; Dr Ben Carson; History; Hitler; Holocaust; Intolerance; Refugees; (more...) Rights; Senator Ted Cruz; Stalin; Ted Cruz; Tolerance, Add Tags  (less...)
Add to My Group(s)
Go To Commenting
The views expressed herein are the sole responsibility of the author and do not necessarily reflect those of this website or its editors.

To Bigotry No Sanction

I Guess We're All Screwed Afterall