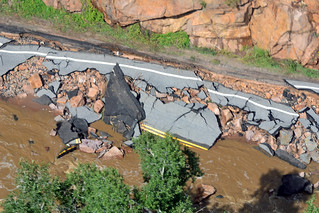 Flint, Michigan is this year's face of the infrastructure problem: Flint's (and many other cities') outdated water systems are literally poisoning people. All around us we see bridges and roads that are in (really) bad shape, aging and failing rail transit systems, traffic jams everywhere, power outages -- problem after problem. Our country's infrastructure is in bad shape and rapidly getting worse.

But we can't get our own government to spend the necessary money to fix the problem.

More than 150 organizations are participating in Infrastructure Week 2016 this week. The website explains that this is "a national week of events; media coverage; and education and advocacy efforts to elevate infrastructure as a critical issue impacting all Americans."

But at CAF every week is infrastructure week because we have been on our soapbox shouting to the rafters about this for quite some time.

To help kick off the week, The Hill looks at "Five big infrastructure emergencies," The Brent Spence Bridge connecting Cincinnati and Covington, Ky., Washington D.C.'s Metrorail system, the Gateway Rail Tunnel project between New Jersey and Penn Station in New York City, the I-10 Bridge in Southwest Alabama over the Mobile River and the San Francisquito Creek bridges in Palo Alto, California.

These are representative of the hundreds, if not thousands, of infrastructure emergencies nationwide, but are hardly the worst examples.

So how bad is the problem? The following chart is from "As Roads Crumble, Infrastructure Spending Hits a 30-Year Low" by Eric Pianin in The Fiscal Times this February...

The American Society of Civil Engineers (ASCE) has issued a new report titled, "Failure to Act." Our Isaiah J. Poole wrote on Friday about "The $3,400 'Tax' You're Paying That The Media Decided Not To Talk About":

"That is the money that the American Society of Civil Engineers this week said in its latest "Failure to Act" report that each U.S. household is losing 'each year in disposable income due to infrastructure deficiencies.' Seen another way, each family pays a $3,400 annual tax for what federal, state and local governments don't spend to properly maintain and expand our transportation, water and electricity networks.

"Not adequately investing in infrastructure is costing the economy more than three times more than what it would cost to bring these systems up to a state of good repair. ... what we should be spending between now and 2025 would take about $1.4 trillion, the ASCE says. The cost of not spending that money, according to the ASCE? Almost $4 trillion. With that loss comes the loss of 2.5 million jobs.

"According to the report, more than 40 percent of buses and 25 percent of rail cars are in marginal or poor condition."

Related Topic(s): Economy; Infrastructure; Work, Add Tags
Add to My Group(s)
Go To Commenting
The views expressed herein are the sole responsibility of the author and do not necessarily reflect those of this website or its editors.