I'm watching, on Netflix, the Star Trek Enterprise series--a more recent one that ran for four years, covering the time before the Enterprise was led by Captain James T. Kirk. 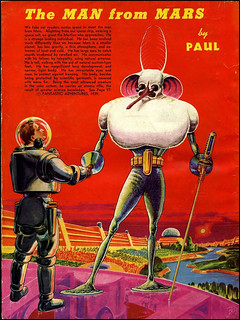 It got me thinking, how could humanity pay for the massive costs involved in interstellar, trans-galactic travel? What would humanity have to offer in trade to interstellar species for new technologies, new information, resources and services? The USA's biggest exports are currently things--technology, oil, cars.

It's hard to imagine that such products would be in demand from interstellar traders.

I doubt that our military goods would be of interest. Our drugs and bioactive compounds might be. It seems that any beings with the ability to reach distant star systems would not need fossil fuels, though they might find them useful for other complex chemical uses. They would probably know how to take fossil fuels and make profoundly smarter, more complex products with them.

It's interesting to consider, through the eyes (eye, compound eyes, magnetic sensors) of an alien race, what humans produce that would be valued.

What would earthlings have to offer extraterrestrial beings with the advanced technology resources to engage in interstellar travel?

We might have rare elements or metals that would be of value. Or there might be bio materials that were worth something to visiting traders. Or they might not consider it ethical to engage in trade for any life form--and see our exploitation of animals as barbaric.

I have a feeling our cultural products would be of most interest--arts, crafts, perhaps music and stories. Or it could be our feelings. There might be a way to transduce emotional experiences so they could be experienced by other beings.

Related Topic(s): Capitalism; Compassion; Empathy; Exploitation; Love; Trade, Add Tags
Add to My Group(s)
Go To Commenting
The views expressed herein are the sole responsibility of the author and do not necessarily reflect those of this website or its editors.