The theater isn't for everyone, but it does have something to say about everyone. It continues to be one of the many artistic spaces where historical representations of the Self and the Other are played out. There in that space, all the world is on stage. So what is happening on that stage these days? Well, something curious, I think. Earlier this year, I decided to write an essay on Othello. I had recently undergone tests, including a bone-marrow biopsy, only to be diagnosed with cancer in May. So I need to work on another project; the previous work on Hamlet was completed in January of this year. 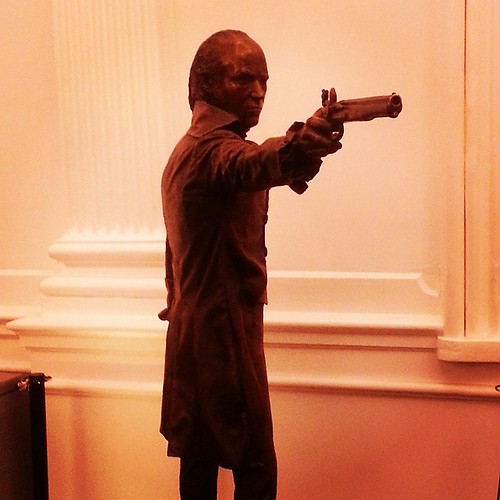 While I was researching for the essay, I came across a few reviews of a recent production of Othello. And I was reminded of someone, I don't remember who it was, a black feminist, I believe, who warned: watch out, they'll steal your ancestors! Then just last week, again, I think of this warning as I watched the PBS documentary on Hamilton: An American Musical.

Last year, 2015, while media and social-network outlets kept Americans focused on the politics of what can only be described as an incredulous presidential election, at the Royal Shakespeare Company (RSC) in London and at the Richard Rodgers Theatre on Broadway, producers of "entertainment" were "doing it"! What these two productions, Shakespeare's Othello and Hamilton: An American Musical, have in common is that both feature black villains. And you have to think: yeah, it's happening!

Some kind of magical trick! Hocus pocus! Abracadabra! What was white becomes black. No one will notice until, of course, it's too late. It's all good. No one will detect the violence of murder! Elimination! Omission!

And you can't see the strings. There's no one puppeteer you can point to. No one magician because too many become complicit. There in Shakespeare was a very European and very Venetian Iago. A very white villain: very anti-Moor, as in, anti-black. Now, Iago is black! There, on Broadway, Aaron Burr, who once originated from a family of emigrants to North America, is suddenly black. The privileged emigrant who became a politician and the nation's third vice president and who killed Alexander Hamilton in a duel is now as black as Shakespeare's Iago! Theater may not be for everyone, but Culture writ large can be as incredulous as the politics of the presidential elections of 2016. The ideas that float across the stage can have consequences just as grave as a vote for a corporate-pleasing war hawk or for a put-up-the-walls-law-and-order sexual aggressor.

Let's say, you would have to question the success of the RSC's Othello and Broadway's Hamilton if you understand anything about how white fear and white control of the social narrative works to promote and sustain white supremacy. This is America. Corporate America through and through. And capital makes it possible for people to pay big money to sit in the theater to watch these productions and those people; "the audience," isn't paying to watch something truly radical. That's not successful. Not in America. So when I read an interview featuring Lucian Msamati, the black actor who played Iago in the RSC production, and he doesn't mention the obvious economic incentive that made him audition for the role, but takes the high road, and notes that the question of "why" is "interesting," then I know I am in fairyland. The American Dream. It can happen to you! It can happen to me! If we're lucky! And white. Oh, but now, in our democratic, multicultural world of the theater, you can be black if...

...You forget you're black!

The actor recalls a summer of workshops. A group of actors sitting around exploring "ideas." At some point, somehow, the idea of a black Iago emerges. A black Iago! Oh, different! Different! Not so boring! Won't this be fun!

For Msamati, Iago's revised racial complexion is not "an issue." In fact, Msamati explains, "it addresses the character of Iago in a very different way, I think. Because suddenly, it heightens--for me anyway--the sense of betrayal."

Suddenly, the issue of betrayal focuses exclusively on the personal. Othello is now a play about squabbling bros--in the hood! But we are not in "the hood," are we? We are in Europe just as full-scale kidnapping and enslavement of Africans is about to take center stage. Suddenly, this production of Othello has substituted betrayal for the big BETRAYAL! Suddenly, white betrayal of Africans disappears. History is revised in an instant! Gone is white fear and hatred that transports Africans from their homeland to the dramatic unfolding of human tragedy on a massive scale.

What, I wonder, could be more crucial than exploring racism, specifically, since Shakespeare hands you that idea and represents his exploration of the subject! It's the Bard's idea, the Bard's subject, and its the Bard's Iago who is white! So when Iago betrays Othello, he does so because, first and foremost, Othello is a Moor, a "blackamoor"!

For Iago, the real Iago, Othello is a Moor (as in dirt). I hate the Moor, he says repeatedly. I hate the Moor! Iago vows to his co-conspirator Roderigo and to the audience, to bring Othello down. He will do so by manipulating Othello, budding up to him, making Othello trust him, and confide in him! Imagine that! The Moor, so trusting, so honest, will "reward me," Iago thinks aloud, for making him "an ass," and for "practicing upon his peace and quiet/even to madness"! And Iago will do so by making everyone see Othello as the epitome of evil. Blackness! Even Othello will come acknowledge his downfall as a consequence of his being black and therefore an inferior human being.

I may be Othello's aide but I'm with you, Roderigo! I know who I am! And I am with all those who despise "the blackamoors"!

Related Topic(s): Betrayal; Black Lives Matter; Collaborators; Creativity; Crime; Empire; Entertainment; Genocide; History; History; (more...) Representation; Slavery; Violence, Add Tags  (less...)
Add to My Group(s)
Go To Commenting
The views expressed herein are the sole responsibility of the author and do not necessarily reflect those of this website or its editors.