As Ukrainian's coup-installed president Petro Poroshenko, looking every day less like a cuddly Chocolate King and every day more desperate, carries out the genocidal plans of his Prime Minister (State's Victoria Nuland's protege 'Yats' and his Hitler worshipping Right Sektor supporters), two American 'experts' have weighed in on how and why the Russian bear needs to be contained.[tag] 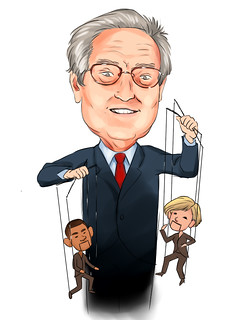 The indefatigable George Soros, whose money magic leaves him plenty of time to weave spells in the corridors of power, corridors of the Europe he fled as a boy, cannot be expected to view with anything but disdain those who Russia today, but having been passed over for a top government position in one of the Baltic countries, has been filling the pages of the New York Review of Books with his prescriptions for saving Ukraine, that could lead to World War III. In this, his second recent article in the New York review, dated February 5th, he calls on Europe to poney up the funds needed to save Ukraine, on pain of being wolfed down by the Russian bear before it can say 'Garcon!'

Surely it is no coincidence that the prescriptions of the little Hungarian refugee who became one of the world's riches men should be carried out virtually in lock-step with the article's publication. Here is his recipe for 'Rescuing Ukraine':

A Russian default would be more than the US and Europe bargained for, so they need to balance the sanctions against Russia with assistance to Ukraine on a much larger scale. Sanctions are a necessary evil because neither the EU nor the US wants to goto war with Russia, however Russia's deflation, it turns out, is bigger than anticipated, 'helping to turn the threat of deflation in the Eurozone into reality.'

And here's Soros's bait and switch: "By contrast, all the consequences of helping Ukraine would be positive. By enabling Ukraine to defend itself, Europe would be indirectly defending itself. Moreover, an injection of financial assistance to Ukraine's economy would help stabilize its economy and indirectly also provide a much-needed stimulus to the European economy by encouraging exports and investments in Ukraine." Russia's troubles (sanctions) and Ukraine's progress (thanks to European help) would persuade President Putin to give up as a lost case his attempts to destabilize Ukraine.

I am neither an economist nor a military strategist, but the plan of a world famous financier seems incredibly simplistic. No wonder, as Soros admits, "the European leadership does not seem to be moved by these considerations." Is it because they have other fish to fry, or they just don't trust the math? None of the above. The problem, according to Soros, is that the poor stupid Europeans don't realize that the great Russian Bear is determined to swallow them whole for breakfast. (In another astonishing warning, he accuses the Europeans of not realizing how important Ukraine is to the stability of the Euro, as are 'Greece and Ireland'"".)

Even taking into account Soros's childhood in Hungary during first the German then the Soviet occupation - born in 1930, he left Hungary in 1947 and made his way to England eventually becoming the poster child for a rags to riches story worthy of a modern Dickens - one is hard pressed to account for his enduring animosity toward Russia. (After all, as his Wikipedia biography touchingly recounts, as a thirteen year old he was asked to deliver notices requiring Jews to report for Nazi deportation, before the Russian army liberated Budapest - but never mind, as my Russian grandmother used to say"..)

Soros insists that although the Yanukovich government failed to bring the country up to par so it could proceed with the association agreement drawn up by the EU between 2007 and 2012, 'it has gone through a revolutionary (sic) transformation since then, so that the EU could "adjust the process accordingly," lamenting that "its cumbersome bureaucratic processes do not allow for that." Instead, it decided that given Ukraine's previous poor track record, the IMF and the European Union have decided that it must show proof of "clear evidence of deep structural reform, not as an inducement, but as a precondition for receiving assistance."

From this perspective, continues Soros "the successful resistance (sic) to the previous Yanukovich government on the Maidan, and later, the Russian annexations of Crimea and the establishment of separatist enclaves in eastern Ukraine are incidental"seen as temporary external shocks." If you think Soros is suddenly becoming rational, think again. This is his lead-in for a long diatribe about the resurgent Russian bear poised to swallow Europe, facing a Ukraine inhabited not by nazi type stormtroopers who, in 2015, dump unwanted politicians in dumpsters in front of crowds, but by young people who, having studied abroad, dis-dained corrupt business for think tanks, academia, and NGO's. Soros imagines that the new Ukrainian civil servants will be able to radically reduce their own numbers, who will miraculously find jobs in the private sector, allowing those remaining in government jobs to be better paid.

Alas, removing obstacles to successful big business would require large infusions from the EU that its own rules prevent. After identifying six ways the Europeans could manipulate its own rules and those of the financial sector, Soros ends with this warning: "Europe needs to wake up and realize that it is under attack from Russia. Assisting Ukraine should be considered as a defense expenditure by the EU countries. Framed his way, the amounts currently considered shrink into insignificance. For if Ukraine fails, Europe will be left on its own to defend itself against Russian aggression."

To clinch his argument, Soros affirms that the sanctions and the body bags have made Putin vulnerable, and that Poroshenko challenged him by 'renouncing his obligations under the Minsk agreement to the separatist areas, on the grounds that Putin failed to respect the cease-fire.' Soros believes that "Russian" troops will be withdrawn from Ukraine and the cease-fire implemented 'in the near future", on condition the sanctions are maintained.

Curiously, Soros admits that if serious reforms are not underway in Ukraine by April 15th, Putin could argue that his problems are due to the hostility of the Western Powers. (But were he to fall, admits Soros, he could be succeeded by 'an even more hardliner, like Igor Sechin or a national demagogue.'

Soros affirms that if Europe would only rise to the occasion and help Ukraine become a land of promise, Putin would not be able to blame his troubles on the East and would have to either change course or 'stay in power through brutal repression, cowing people into submission'. Then, contradicting the previous paragraph he affirms that "If he fell from power, an economic or political reformer would likely succeed him. Either way, Russia would cease to be a potent threat to Europe."

Concluding with an urgent plea for Europe to help Ukraine, Soros announces that the IMF is to make its fateful decision on Ukraine at a board meeting on January 18. Is it pure coincidence that the Kiev renewed its offensive in eastern Ukraine during that same week?

But wait, there's more. Having heard that Howard Fineman is now Editor-in-Chief of Huffington World, I checked it out. Turns out it's published in collaboration with 'Project Syndicate' a German think tank. On the day I looked it up, the lead article was by Joseph S. Nye, a name that was familiar to me, but whose bio I didn't know. Born in 1937 Nye is: