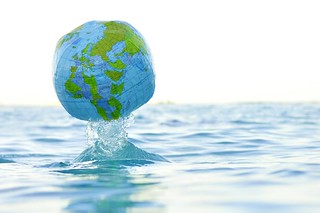 Corporate mainstream media outlets are missing something very important as the general election draws closer and both Democrats and Republicans start freaking out that it'll be the end of the world if the other party gets into the White House. Media are completely ignoring the fact that unless we do something right now to fundamentally change what fuels our economy, it actually will be the end of the world as know it.

For the fourth time this year, NASA announced that last month was the warmest such month on record, with sea and land temperatures at 1.11 degrees Celsius warmer in 2016 than the average April temperature between 1951 and 1980. It was also the seventh month in a row to be at least 1 degree warmer than the monthly average from 1951 to 1980.

In other words, the planet is getting warmer and warmer, and we're setting more and more planetary records with every passing month. And now we're starting to see the front end of runaway climate change and getting a glimpse at the disasters that lay ahead unless we immediately stop burning fossil fuels.

In Alberta, Canada, on Monday, 8,000 workers were evacuated from oil camps near Fort McMurray, where wildfires have already forced more than 80,000 people to flee. That fire has destroyed more than 2,000 structures, and Fort McMurray still hasn't been repopulated because the air quality there is so bad that it registers a 38 on a scale that normally only runs from 1 to 10, with 10 being the worst. The wildfire has been fueled by unusually dry and hot air that has sat over the region because of atmospheric blocking patterns that are connected to the rapid retreat of Arctic sea ice over the last few decades. And that's just what we've seen in terms of climate in the last week, just for starters.

But what's really alarming, why each and every report about monthly and yearly climate records is so important, is perfectly encapsulated in this graphic put together by climate scientist Ed Hawkins. In the graphic, each year is represented by 12 monthly data points forming one rotation around, and you can see that from the 1850s until the 1910s, the circles stayed basically the same size with just a little variation.

In the 1920s, the circles start slowly growing bigger and bigger, until the 1980s, when the climate clearly starts to "runaway." Then, in the last two decades, we see a clear "amplification" as the global temperatures start magnifying year after year, the circles growing larger and larger without retreat. That amplification is a terrifying thing to see visualized, because it's what a "tipping point" looks like; it's a graphical representation of real, documented, runaway climate change. It's a concise way to show runaway climate change, but even at that, it sanitizes the reality.

Reaching the tipping point means a constant state of global instability and never-ending resource wars. It means that 1.3 billion people will be put at risk by 2050, according to the World Bank.

Reaching the tipping point means increased violence as climate refugees desperately flee to places where they might be able to survive, and countries struggle to "keep their borders secure."

Runaway climate change looks like deserted villages, fields of crops that won't grow and droughts that cause millions to go hungry, like we're already seeing in Zimbabwe and in India.

Reaching the tipping point means superstorms like Sandy, Katrina and Jonas will become more frequent as Greenland's ice melt dumps more water into the Atlantic Ocean, the "Great Conveyor Belt" shuts down and the Atlantic Ocean gets warmer and warmer.

The science behind climate change can sometimes be described neatly in graphs like Michael Mann's hockey stick and Ed Hawkins' spiral. But the reality of runaway climate change means horrible suffering and desperation for billions of people, at the cost of hundreds of trillions of dollars.

The reality is that we're already seeing the victims of climate change. We see them in the death tolls in Syria and Northern Africa, we see them starving in India and drowning in the Pacific Islands, we see them evacuating their homes in Alberta, tilling drought-stricken fields in California and rebuilding Atlantic City and New Orleans.

There's no time to wait and debate what we need to do. We're already seeing the climate tip. It's time for our politicians and business leaders to make tackling climate change their biggest priority. We need to put a tax on carbon, and we need to fundamentally transform our global economy to be 100 percent fossil-free. Now.

Related Topic(s): Climate Crisis; Disasters; Global Warming, Add Tags
Add to My Group(s)
Go To Commenting
The views expressed herein are the sole responsibility of the author and do not necessarily reflect those of this website or its editors.