Reprinted from The Unz Review 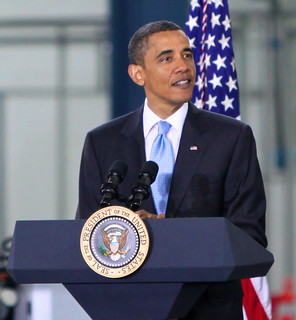 My wife and I had a number of visitors over the holidays, including several foreign friends from our time spent in Europe and the Middle East. Both the Americans and the visitors from overseas eventually came around to wanting to discuss how deformed United States foreign policy has become, noting generally that the elite that runs Washington seems to have no clue about what is going on outside the continental U.S.

Worse, there appears to be no appreciation for how negatively the rest of the world views the United States. Several marveled at the mind boggling formulaic speech made by President Barack Obama at Christmas in which he announced that the United States had officially "ended its fighting role" in Afghanistan, a blatant bit of misdirection in that Washington is retaining more than 10,800 troops in the country with full authorization to engage the Taliban as necessary.

President Obama fancies himself the leader of the "free world" yet he heads a nation that until recently organized black site prisons for torturing suspects and which continues to use armed drones to kill innocent and guilty alike. One friend asked why is it that so many outwardly intelligent people in the White House and its various agencies can get so many things so wrong. As the dysfunction dominates both Democratic and Republican administrations and runs the gamut from the political left to the political right one must assume that there is a fundamental flaw in the way Washington goes about its business, though it might also be observed that liberal democracy promoters and neoconservative regime changers generally come to the same consensus conclusion when confronted by a foreign crisis. They opt for military intervention.

Broader issues rarely surface because the simplistic and violent solution to address all foreign policy ills drives the process. Regarding the war against ISIS, an observant former Army officer friend opined in a Christmas email "Here is why we are losing. They'll look at any answer but the correct one: we (the West) are self-evidently waging war against the Islamic people for all intents and purposes, and the targeted people are looking to those they see as fighting back in their defense." A former FBI officer asked "How can making ourselves into the most hated nation on Earth possibly have any benefits?"

To return to the example of Afghanistan one might wonder why Samantha Power, Susan Rice and President Barack Obama himself have not read the recent excellent analysis by Kelley Vlahos and also a piece by Pamela Constable in the Washington Post? Do they know something the rest of us do not know? Undoubtedly, but how are they interpreting what they have learned? Afghanistan after 13 years of outside interference is ungovernable and it has evolved into a completely corrupted narco-kleptocracy that has become a bloody money pit. The bid to convert the country into a drug and terrorist free bastion of democracy and women's rights has been a fantasy from start to finish. Whenever the last foreign troops eventually leave the country, it will revert to form and it won't be pretty.

So why is Obama going through the charade? My friends and I concluded that it is all politics. The White House was blamed for losing Iraq when the government in Baghdad forced the U.S. military to depart in 2011 and it doesn't want the Democrats to be blamed for also losing what the president has described as the "good war" in Afghanistan. Obama may be a lame duck personally but there is always an election coming up; in this case the 2016 presidential race where the usual culprits are already lining up and waving their national security credentials.

The presidential posturing would all be vaguely amusing except that people will die as a result and money that would best be spent here at home will be wasted, no matter how it plays out. And there are a number of other foreign policy issues that might similarly benefit from a little sunshine and airing out. The most critical to actual U.S. interests is Russia. The United States has only one strategic interest relating to Russia and that consists of keeping the relationship on an even keel. Russia remains, in terms of its nuclear weapons arsenal and delivery systems, a superpower.

The United States provoked the current crisis with Russia by intervening directly in Ukrainian politics. Sanctions will not change Russian policy because for Moscow a politically friendly or unaligned Ukraine and the status of Crimea are vital interests. Washington has a great deal to lose if Russia chooses to go tit-for-tat in responding to U.S. orchestrated attacks on its economy. Moscow has been working closely with both Washington and the Europeans regarding tracking the financing of terrorist groups, proliferators, and drug cartels and has also cooperated politically over how to deal with Syria, Iran, and North Korea. Russia could unilaterally break sanctions on oil purchases from Tehran and start selling weapons to Damascus, including up-to-date air defenses that could bring down American warplanes. It could ease restrictions on trade with North Korea. At the United Nations, it might use its veto selectively to impede U.S.-promoted initiatives.

So there is no good reason to be backing Russia into a corner from which it cannot extricate itself but that is precisely what the Obama Administration and Congress are doing. It would be much wiser to accept that what happens in Russia stays in Russia. Even if Vladimir Putin is the monster that the western media portrays him to be, and I would argue that he is not, it is none of our business.

The pressure on Russia has coincided with a so-called pivot to Asia, which is in reality a move to contain China. China is a competitor, not an enemy, but surrounding it with hostile states under the direction of Washington guarantees that it will reconsider its strategy. It has already begun to do so by drawing closer to Russia.

And then there is the Syria-ISIS-Iraq-Iran entanglement. It would require the exercise of only a tiny bit of hindsight to suggest that the American overthrow of Saddam Hussein, which was based only on a series of neocon concocted fantasies, created the witches brew that has now engulfed the region. We did it and we are now contemplating just how to clean the mess up. And we are failing to come to grips with the fact that the only way to defeat ISIS is on the ground using forces that have an actual compelling interest in doing so.

As Turkey, for reasons of its own, prefers to keep its options open with ISIS to forestall creation of a Kurdish State, that means obtaining the cooperation of Syria and Iran, which Washington has officially rejected. Instead, the United States is working to empower the hopelessly corrupt and incompetent Iraqi Army while reconstructing the largely fantastical pro-Western rebel movement in Syria, both of which will (a) run before surrendering, (b) throw away their weapons and desert their posts or (c) join ISIS at the first opportunity.

And how can one forget Iran? Talks over the country's nuclear program have been going on for more than a year. It now appears that they will fail in spite of the fact that it is in the U.S. interest to have them succeed. Obama lacks the will to make that happen even though it would be a rare foreign policy success that would benefit all parties. After all, it is not really about doing what is best for the country, is it? There is an election coming up and a lot of people with a lot of money and direct access to the media hate Iran.

And finally there is the case of Israel. The past two weeks witnessed the visits to Jerusalem by presidential wannabe Governor Mike Pence of Indiana and Senator Lindsey Graham. Graham pledged complete congressional support for Netanyahu and in particular promised to follow Israel's lead on what to do about Iran. Pence just groveled. The visits by senior federal and increasingly state government personalities to Israel to obtain Benjamin Netanyahu's endorsement are both embarrassing and demeaning. Israel is just not that important in the world outside the Washington beltway and the so-called special relationship that has made U.S. policy in the Middle East subordinate to Likud party politics should be declared null and void.

The Palestinians deserve a state on humanitarian grounds and are finally beginning to understand that the real obstacle to sovereignty is a timorous and morally corrupted Washington, not the neo-fascists in Tel Aviv. Enabling a Palestinian state would defuse much of the anti-American rhetoric in the Middle East and elsewhere in the Muslim world, a net gain for any United States citizen who travels or does business overseas. It is in our interest to make it happen no matter how much the Israelis squeal. But it won't happen because Israeli-American Haim Saban will not come up with the hard cash for Hillary in 2016 if there is any softening on Israel.

Related Topic(s): Benjamin Netanyahu; Iran; Isis; Israel; Obama; Palestinian; Politics; Vladimir Putin, Add Tags
Add to My Group(s)
Go To Commenting
The views expressed herein are the sole responsibility of the author and do not necessarily reflect those of this website or its editors.