From opednews.com/articles/The-war-of-the-Puppet-Mast-by-dale-ruff-Advisors_Allies_Deep-Politics_Donald-Trump-161127-421
(Image by opednews.com)   Details   DMCA
/> Putin on Trump:

Trump hears: " he called me a genius. He said Donald

Trump is a genius."

NO he didn't, Donald. That is what you want to hear, but he said you were talented, not a genius. Repeating that little lie doesn't make it any more believable.

Trump, being a total narcissist craves admiration, and that is why he thinks "talented" means "genius" and "brilliant." If no one else will toot the horn he wants to hear, he will toot it himself. 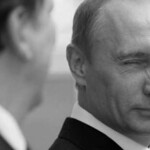 Copyrighted Image? DMCA
Putin is a master political psychologist, and he knows how to flatter people to control them. Trump has fallen for it completely! He is a weak man who has used his bully tactics to intimidate people; Putin is not intimidated, for he has made of Trump a pliable lapdog.

His entire detente with Putin is based on a simple act of flattery which Trump then exaggerated to make himself a "brilliant genius."

In fact, he is a fool and Putin is playing him as such. The bad news is that Trump has chosen as his chief advisors a core of anti-Russian war mongers, against whom he cannot stand up.

Trump said "NATO is obsolete." Then, after the generals talked to him, they did not come out and say, "NATO is useless," but Trump came out and said...."By the way, I am a big fan of NATO."

That shows that he is a tool of the neo-cons, whom he has surrounded himself with. Putin, being brilliant based on his achievements, knows that but seeks to use Trump to restrain the war hawks Trump has selected to advise him. That is brilliant strategy.

Related Topic(s): Abyss; Conspiracies; Elections; Good Old Boy Network; Krugman; Media; Media Lies; People; Post-election; Propaganda; (more...) Reality; Voting, Add Tags  (less...)
Add to My Group(s)
Go To Commenting
The views expressed herein are the sole responsibility of the author and do not necessarily reflect those of this website or its editors.